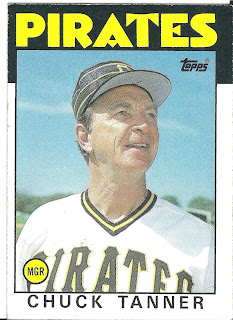 Card thoughts: Tanner is still all smiles, despite the fact that a) the once proud Pirates franchise was collapsing under a pile of cocaine b) the Pirates would finish in last place in 1985 and c) he was about to be fired.

The player/manager: Like many managers, Tanner had an unremarkable major league career. His career as a “regular” major leaguer lasted just three years (1956-1958), and his most successful years were with the Cubs as a fourth outfielder.  He managed for some time in the Angels chain before getting the chance to manage the White Sox in 1970. With the White Sox, he was able to bring out the best in the mercurial Dick Allen, leading to him winning the MVP in 1972. Other items of note during his White Sox tenure: He went with a three-man rotation in 1972 (the year he won the Manager of the Year award), and converted Rich Gossage and Terry Forster into dominant relievers.

By 1976, he was with the A’s where he developed a steal-at-all-costs strategy. In 1976, in the midst of Charlie Finley dismantling the former powerhouse, the A’s set a modern record with 341 steals (the stolen base was so paramount, the A’s employed two players—Larry Lintz and Matt Alexander—whose sole job was to pinch run). In an unusual move, Tanner was “traded” to the Pirates in the off season for Manny Sanguillen.

With the Pirates, Tanner had the most success, leading the team to a World Series win in 1979. That season, Tanner is credited with inventing modern bullpen usage, by designating relievers to come in one inning at a time after the sixth inning. But success faded fast, as several of his players (including the Pirates mascot!) were implicated in the Pittsburgh drug trials in 1985. By 1986, he was out.

After accepting the thankless task of managing, the creaky and dull 1986–1988 Braves teams, Tanner was replaced by Russ Nixon, thus ending his managerial career with a 1,352–1,381 won-loss record.

Tanner, and since his death, his family, run a restaurant in New Castle, Pennsylvania named "Chuck Tanner's Restaurant". 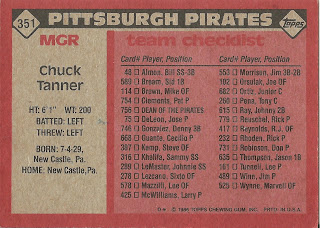 Rear guard: This is one of my best preserved cards in the set (and the back isn't marked up), which means I either got this card late in the year, or it was a substitute for a more beat up one.

No glaring omissions on the Pirates cards chosen for this set. Outfielder Doug Frobel played 50 or so games for the Pirates, but he was sent to the Expos late in the year (and there isn't a card for him, even in an Expos uniform, in this set.)
Posted by Jets Break Jaws at 5:30 PM