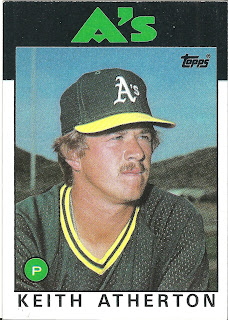 Card thoughts: This picture is nearly identical to his card in 1985, except he's looking in a different direction. But nothing looks worse than his cards in 1989, where he was sporting some seriously ugly glasses (and, on this traded card, was wearing eye black beneath them for some reason).

The player: Atherton was one of those workhorse middle relievers so common in the 70s and 80s. Although he never pitched over 60 games a year, he frequently went over 100 innings of work.

Judging by his minor league record, Atherton was a slow learner as he generally spent two years at each level. Despite being a starter in the minors, Atherton made his debut as a reliever in July of 1983, and would never start a game in the majors. For the next few years, Atherton inhabited the largely anonymous role of the  middle reliever, where his ERAs were generally above four, which was high for the time. In fact, his nickname in Oakland was “Boom Boom” because of all the home runs he gave up (by year: 7 in 1983, 13 in 1984, and 17 in 1985). Finally, after exhibiting a 5.87 ERA over 15 innings in 1986, Atherton was traded to the Twins for a bat and a bag of balls (actually, pitcher Eric Broersma, a 26 year old minor league veteran). With the Twins, he would have the best several months of his career in 1986, when he saved 10 games (tops on the team) and had a 3.75 ERA.

The next season, the Twins acquired reliever #35 Jeff Reardon, and Atheron was relegated to the middle relief role he was so accustomed to, and provided average work in the Twins World Series winning 1987 campaign, with his ERA just above league average and his WAR 0.1. With this example of mediocrity, Atherton was rarely used in either the ALCS or World Series, with Kelly preferring to go with
more reliable relievers #47 Juan Berenguer and #324 Dan Schatzeder. After another year in the Twins pen, Atherton was traded to the Indians for pinch hitter Carmelo Castillo. Atherton was released soon after his final major league game, when he pitched a third of an inning and gave up three earned runs on four hits and a walk.

Signed by the Tigers a few days later to a minor league contract, he pitched 6 games at Toledo but none in the majors. He signed another contract with the Expos in December, but he never made it out of spring training. 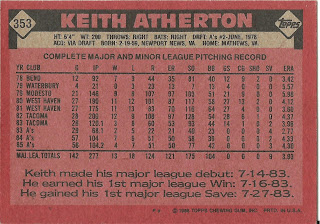 Rear guard: Atherton's first win came after he relieved the unfortunately named Gorman Heimueller who had given up 5 runs to the Red Sox in just 3 2/3 innings of work. Atherton pitched the last 5 1/3 innings, and benefitted when the A's scored 7 runs off Bob Stanley.
Posted by Jets Break Jaws at 10:56 PM