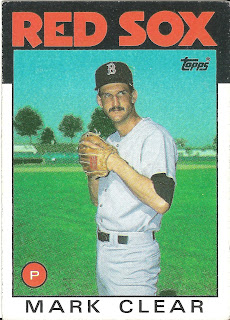 The player: Clear possessed a hammer curve and blazing fastball. When he kept his walks down, he was effective. He was the first pitcher to strikeout over 100 men without making a start.  Unlike today’s relievers, many of Clear’s saves came by “accident”: He was generally pitched several innings in relief, and just happened to finish the game after his team came back.

Clear was one of those players who had a great season just about every other year, but in between he was merely serviceable. As a rookie with the Angels, Clear made the all star game (where he blew a save), and received Rookie of the Year and MVP votes, on the strength of both his 11 relief wins and 14 saves, and the fact that the Angels made the playoffs for the first time. He also had the support of his uncle Bob, who was the bullpen coach that year.

In 1980, out of the 58 games Clear pitched, he either won, lost, or got the save in over 50% of them a feat that harkens back to the Roy Face days of early relief pitching specialists.  Although his wins and saves were reduced, he was striking out over a batter an inning (a big deal in those days), and his ERA dropped to 3.30.

Then, in a deal in which the Angels got royally rooked, Clear was sent to the Red Sox with future batting champ Carney Lansford and Rick Miller for Butch Hobson (.657 OPS in his only Angel season), and former all-star Rick Burleson (injured for most of his Angel career). Clear had his best overall season with the Red Sox in 1982, when won 14 games, saved another 14, and struck out 109 in 106+ innings. He made the all star game again but did not play.

Clear must have been sorely overused in ’82, because he suffered through his worst season the next year. He became a mop up man after giving up 101 hits in 96 innings, along with 68 walks. This ballooned his ERA up above 6, and he almost got traded in the winter. But Clear bounced back a bit in 1984, although he barely struck out more than he walked.

It was “clear” that Mark could no longer be relied on to close games for the Red Sox (#91 Steve Crawford and Bob Stanley shared that role), so he became expendable. He was traded straight up to the Brewers for utility infielder #317 Ed Romero after the 1985 season.  The Milwaukee team hoped a change of scenery would help Clear and they were right. He rebounded with a strong 1986 campaign, posting career lows in ERA (2.20) and walks per 9 innings (4.4), with a career high 16 saves. At one point, he pitched 26 straight innings without giving up a run.

Clear regressed a bit in 1987 (4.48 ERA, 6.3 walks per 9 innings), and was pitching well in 1988 when he pulled a muscle near his elbow in July, which kept him out of action for a month (he had previously inflamed the elbow in May). He later injured the elbow again and was shut down for the season after August 20.

Clear was out for the entire 1989 season, and, after pitching 4 games in May for the Angels, signed with the Cubs on a minor league contract.  He was released for good after pitching 1 inning for AAA Iowa. 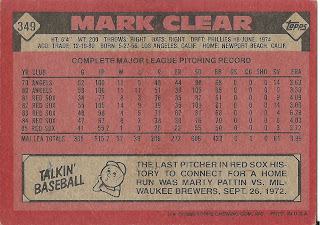 Marty Pattin had been traded the year before from the Brewers, so that home run would have been extra sweet. He actually hit two home runs that year, and drove in 9 runs. The home run on September 26 was off Bill Parsons. Here's Pattin's card from that season.
Posted by Jets Break Jaws at 10:49 PM