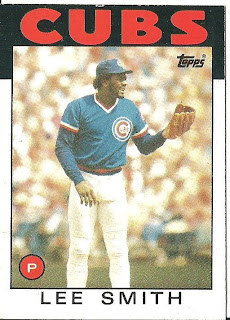 Card thoughts: Here’s Lee Smith, in all his tall-man glory. When I look at this card, I smile inwardly and think of all the joy I had as a youth, watching Smith dominate in the late innings.

The player:  One the most dominant closers of his era, Smith should be in the Hall of Fame.  He was also involved in one of the worst Cubs’ trades of all time.

Originally a starter in the minors, Smith was struggling with an ERA over 6 when his manager at Midland moved him to the bullpen. In that era, a bullpen gig was seen as a demotion, with little future. Disappointed, Smith briefly quit and played college basketball. But at the request of Hall of Famer Billy Williams, he accepted his role, and was called up at the end of 1980.

In 1981, Smith was on the team for good, but veteran Dick Tidrow was the closer. So he pitched mostly in middle relief, with a league average ERA. With Tidrow's move to middle relief in '82, Smith became the closer, and would remain a closer the rest of his big league career where owed most of his early success to Fergie Jenkins, who taught him the forkball and how to better use his slider.

His first big season as a closer was in 1983, when he led the league with 29 saves and had a 1.65 ERA, which turned out to be the lowest ERA in his entire career. He was named to the all star team, but got hit hard by the Americans. In the eighth inning, Smith gave up two runs, one earned.

In the next three seasons, Smith saved 30 games each year. Highlights during this stretch include recording one save and one loss in the 1984 ALCS, and pitching in the 1987 All Star Game, in which he earned the win by pitching 3 scoreless innings.

Despite Smith’s success, the Cubs felt he was getting too fat, and that was putting too much pressure on his knees. I think they believed Smith was a year away from being washed up and didn’t value a consistent closer like they should’ve. So GM #231 Jim Frey, in his infinite wisdom, sent Smith to the Red Sox for #210 Calvin Schiraldi (who Frey hilariously compared to a young Lee Smith) and #181 Al Nipper. I still remember how angry I was at this trade. Very soon, I was proved correct.

Far from being washed up, Smith would pitch another decade and rack up another 300 saves.  With the Red Sox, Smith was not as dominant as with the Cubs, but he did save 58 games over three seasons. But the Red Sox, like the Cubs, became convinced that Smith’s ballooning weight would lead to injury, so they dealt him in 1990 to the Cardinals for Tom Brunansky. The move back to the NL reinvigorated Smith, and he led the league in saves in 1991 (47) and 1992 (43). In the former year, he was second in Cy Young award voting.

Although Smith had saved 43 games again for the Cardinals in 1993 (which made him the all-time saves leader), they were well out of the division race and his ERA was 4.50. So, he was sent to the Yankees for almost nothing. His entire Yankee career lasted eight games before he became a free agent. Smith signed with Baltimore, where he led the league in saves again (33), and pitched in his last all star game (he gave up a game-tying two run double to Fred McGriff).

At 37, Smith signed with the Angels where he saved the same number of games as years he had lived. But that would be his last year as a dominant closer, as his knees finally gave out. Short stints with the Reds and Expos ended his career.

When he retired, Smith was the all-time saves leader who, it could be argued, was the best reliever for much of his era Although he has gotten about 50% of the vote each time he’s up for the Hall of Fame, the Hall consistently undervalues the closer (only Dennis Eckersley, Hoyt Wilhelm, Bruce Sutter, Rich Gossage and #185 Rollie Fingers are in.) Smith’s career is certainly on par with theirs.

Smith coached the South African national baseball team in 2006, and is the minor league roving pitching instructor for the Giants. 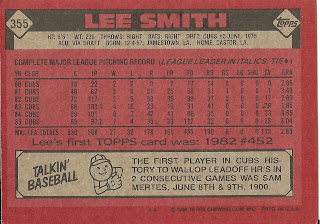 The "Talkin Baseball" items for long running franchises are fun, because it is almost always some player you've never heard of. There's actually a card of Mertes, where he looks a bit like actor Ed Helms. Nicknamed "Sandow", Sam's home runs were likely of the inside-the-park variety,  Mertes actually had good power for the time, with a career slugging percentage just a tick below .400.

In 1900, Mertes hit 7 homes and drove in 60 runs while stealing 38 bases. He was a greater success with the New York Giants, where he twice drove in over 100 runs.
Posted by Jets Break Jaws at 9:50 PM