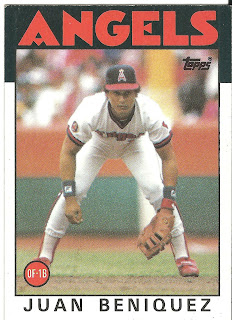 Card thoughts: Juan Beniquez was a utility player in 1985, but he played most of his games in the outfield. He is shown fielding his secondary position, first base, probably because they couldn’t get a long range shot of him in the outfield.  Beniquez sported a  well-manicured afro on his cards in the 1970s.

The player: Beniquez came up as a shortstop, spent a few years as an excellent starting centerfielder for the Rangers, but found his niche as a utility player/pinch hitter where he had his most consistent offensive success.

A poor fielding shortstop in the minors (he once committed 64 errors in a season), it took the Red Sox two seasons before they moved Beniquez to centerfield. He went down to Pawtucket to learn center for the entire 1973 season  and hit .298 with an .833 OPS. Up to the majors for good in 1974, he platooned with Rick Miller in center and got the majority of starts there. In a stark contrast to his butter finger approach at short, he held his own in center.

The arrival of #55 Fred Lynn in center in 1975 relegated Beniquez to the bench and ultimately made him expendable. The Red Sox sent him to the Rangers with Steve Barr and a minor leaguer for Hall of Fame pitcher Fergie Jenkins who was only a year away from a 25 win season. What seemed like a lopsided deal at the time ending up being more even, as Jenkins struggled to stay healthy with the Red Sox, and Beniquez became a gold glove centerfielder with the Rangers.

In his first season with the team, Beniquez topped the league in many fielding categories, but he hit for absolutely no power (a .301 slugging percentage). In a turnaround, Beniquez began hitting the ball with more authority in 1977, belting 10 home runs and raising his slugging percentage over 100 points.  The offensive surge probably had as much to do with Beniquez winning a Gold Glove as his fielding, especially since, although still quite good in center, he wasn’t as spectacular as he had been the year before.

A similar season in 1978 followed, and it was enough to attract the Yankees, who got him as part of a huge trade (a bunch of youngsters went in both directions, but the key figures were Dave Righetti (to the Yankees) and Sparky Lyle (to the Rangers)).  Unfortunately, Beniquez broke a finger in spring training and only played 62 games for the Yankees before being traded to the Mariners.

A .228 season followed, and Beniquez hit just .181 in 1981 for the Angels. It looked like he had forgotten how to hit, and his career was in serious jeopardy.  But instead of regressing, Beniquez began to finally learn how to hit by studying pitchers and not trying to pull everything. He credited manager #81 Gene Mauch for instilling him with the confidence he needed to make this transition. After hitting .265 in 1982, Beniquez hit over .300 the next four years (three with the Angels, one with the Orioles). He was especially dangerous as a pinch hitter, hitting .300 (1984), and .474 (1986) in that role.

After his last .300 season with the Orioles, Beniquez was traded to the Royals for two minor leaguers. But by this time he was 37 and too old to contribute much in the field. The Blue Jays wanted him for the stretch run in 1987, and sent Luis Aquino, a very useful reliever, to the Royals for him. After 27 games in 1988, Beniquez was released, ending his career.

After his major league career was over, he continued to play winter ball in Puerto Rico until 1991. 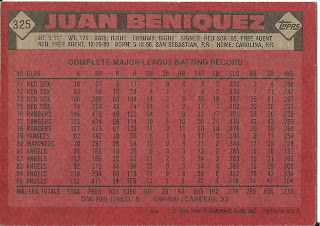