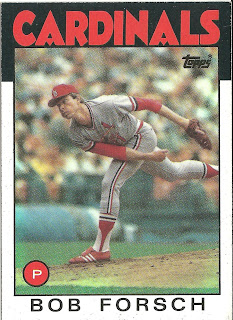 Card thoughts:  If you outlined the flail of Forsch’s arms and legs, you would have an interesting Chinese character.

The player:  Forsch relied on control rather than power as a pitcher, which meant that he was reliant more than most pitchers on the fielding and hitting that supported him. This meant Forsch was an inconsistent winner and, by the standards of the time, had an unusually high amount of no decisions. A long time Cardinal, he is a surprising third all-time in wins for the club (163).

Called up in 1974, Forsch sported ERAs below 3 for the first two years of his career. Afterwards, his ERA was eerily close to 3.76 (his career ERA) for the next several years.

After winning 15 games in 1975 (and following an off year in 1976), Forsch would win 20 games for the first, and only time. Another highlight came in 1978, when he hurled a no hitter against the Phillies. Despite this, the season would be the worst of his career, as his 17 losses (against 11 wins) was 2nd in the year.

The next several years, Forsch won 10-11 games a year until 1982, when he was instrumental in the Cards 1982 World Series season. His 15-9 record was easily his best since 1977, and although he shut out the Braves in his only NLCS start, in the World Series he was ineffective, losing both of his starts.

Forsch yo-yo-ed back to a losing record in 1983, although he did become the only Cardinal to ever pitch two no-hitters when he blanked the Expos on September 26. After being injured for much of 1984, he once again reached the World Series with the Cardinals in 1985 after a regular season record of 9-6. Once again, he faltered in the Series, losing his only start after giving four runs in just over an inning of work.

Although Forsch won 14 games in 1986, he was beginning his decline. Still valuable as a good veteran clubhouse presence, he famously drilled Jeff Leonard in the back after the latter “hot dogged” a home run earlier in the 1987 NLCS.

Forsch finished out his career with two sub-par seasons with the Astros. He got back into baseball in 2009 as the pitching coach for the Billings Mustangs, the short-season A ball affiliate of the Reds. He died November 3, 2011. 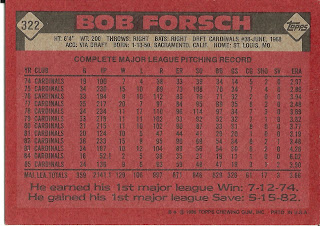 Rear guard: Forsch's first major league win was an easy one, as he went the distance against the Braves, beating them 10-0. He also had a single.