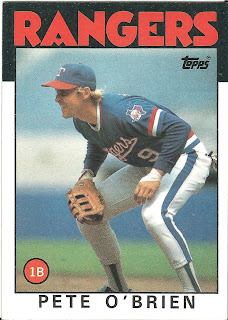 Card thoughts: Second infield fielding card in a row! O’Brien appears to have a wrist injury on his left hand.

The player: O’Brien won the starting first base job with the Rangers due to his fielding prowess. He had great range at first, which allowed him to lead the league in assists twice. Only later did he become a solid hitter.

O’Brien had an orderly march to the majors, spending a year at each level (Rookie, A, AA, AAA) before reaching the majors for good in 1983. The power he showed in the minors deserted him that year, and he slugged just .347. But by the time this card was issued, O’Brien was putting up numbers similar to his minor league ones. In 1985, he hit 22 home runs and drove in 92 with a career high 34 doubles, good for a .452 slugging percentage. What always made O’Brien even more dangerous was his eye at the plate: After 1984, he rarely struck out more than he walked. In any other year, this would have given O’Brien a shot at the all star game, but he had the misfortune of playing against #30 Eddie Murray and #180 Don Mattingly that year, which somewhat obscured his accomplishments.

Solid years in 1986 (23 HR, 90 RBI, .854 OPS) and 1987 (23 HR, 88 RBI, .805 OPS) did little to elevate O’Brien to the level of elite first basemen in the public’s mind. It didn’t help matters much that back then the Rangers were a generally miserable team. After another season, O’Brien was traded in a big deal that included disappointing former prospects Jerry Browne and Oddibe McDowell to the Indians, for Julio Franco, who would go one to have several great years with the Rangers. Browne would somewhat fulfill his promise with the Indians, but McDowell wouldn’t even last the 1989 season. O’Brien would contribute not much better than average numbers offensively, although he did reach the top ten in walks (83). The problem was that he was getting pitched around a lot as the guy who hit ahead of him most of the year (Cory Snyder) wasn’t doing jack with the bat.

Missing the RBI opportunities that were so plentiful in the dry Dallas air, O’Brien opted for a similarly offense friendly the park, the Kingdome, in 1990.  The first year there didn’t go so well, as O’Brien was injured in early May. The problem was a broken left thumb, suffered in a game against the Angels. He came back in June, but never got it going offensively, driving a career low 27 runs as a starter, and never getting his average above .250.

1991 saw O’Brien return to form (17 HR, 88 RBI) but it would be his last good season.  He hit .222 the next year, and appeared in just 72 games in 1993, his final season. O’Brien gave up a year’s salary to retire, saying his family and God were more important than an extra two million in cash.

It is unclear whether Pete O’Brien ever entered the ministry, as he had intended after retiring. Perhaps his spiritual quest took a more new-age direction. He and his wife currently operate a relaxation spa outside of Dallas that offers floatation therapy, among other things. 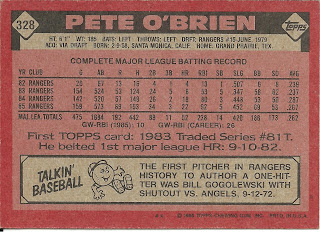 Rear guard: Here's his first card. Pretty squinty. O'Brien was hitting second when he launched a solo shot off of Hall of Famer Gaylord Perry for his first home run.

What a last name for Bill! I wonder if they called him "Goggles." He went 4-11 in 1972, although he game up less than a hit per inning. Here's his card from that season. Gogolewski looks sad.
Posted by Jets Break Jaws at 9:33 PM