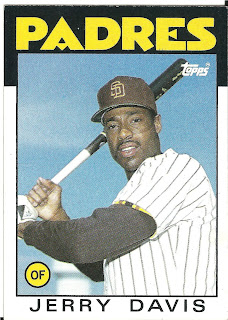 Card thoughts: So many dull “yearbook” Padres photos in this set. I can recall #182 Bobby Brown and #262 Mario Ramirez in almost the same exact pose as Davis. This would be Davis’ only base Topps card (he also appeared in the 1985 trade set, sporting glasses).

By the way, his name is misspelled. It should be “Gerry.”

The player: A smart man, Davis was originally drafted by the Red Sox out of high school for $10,000 but elected to go to college (with a $35,000 scholarship). He earned a sociology degree from Howard University. Wisely, he said his reason for turning down the Red Sox was that, since the odds were stacked against him making the majors, or even AAA, he wanted to have something to fall back on. Davis used his degree in the off season when, after being drafted by the Padres, he was a substitute teacher in the off-season.

Davis was an “organization” man for the Padres, who constantly tinkered with his approach at the plate. This is confusing, because he had the enviable combo of speed and power. For instance:

--He kept hitting in the Texas League, sporting a .353 average


·        --And finally, he dominated at AAA Las Vegas (although the desert air certainly helped).

Despite his natural gifts, the Padres tried turning him into an opposite field slap hitter for some reason. Eventually, he got a real shot at the majors just before this card was issued. Usually used as a late inning defensive replacement and pinch hitter (Davis started just 9 games in the outfield), he hit .293 but was still sent down near the end of the year.

Davis had a good chance of making the club out of spring training in 1986. But a knee injury in January robbed him of one of greatest assets (his speed), and he ended up missing the entire 1986 season because of it. This was sad, because Davis seemed like a very hard worker who couldn’t catch a break.

The knee injury, and likely the Padres believing Davis acted irresponsibly by trying to come back too soon, led to his release. He was picked up by the Tigers but was stashed all the way down in A-ball while his knee continued to recover. He did reappear in the Padres organization, when he was loaned to their AA club mid-season. But, seemingly discouraged, Davis gave up playing at young age of 28 after the season. 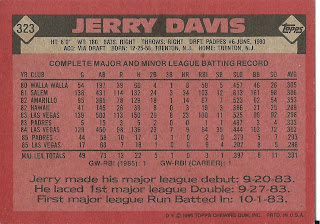 Rear guard: All the good firsts happened to Davis during his brief September call up in 1983. In his debut, he replaced left fielder Bobby Brown in the line up in right field, with #10 Tony Gwynn moving over to left. His first RBI came on a big day against the Braves when he had two hits, scored a run, stole a base, and drove in Kevin McReynolds.
Posted by Jets Break Jaws at 10:07 PM