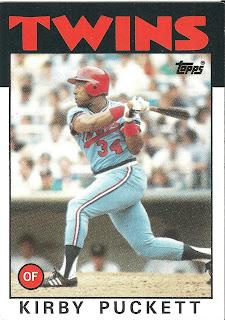 Card thoughts:  Kirby Puckett was not considered a star this early in his career, hence the non-0 issue. As you can see in the photo, Puckett does not have a baseball body, as he was short and portly. But he would be sent to the Hall of Fame on the first ballot.

The player: Puckett grew up in the Robert Taylor Homes (now demolished), perhaps the most notorious housing project in Chicago other than Cabrini Green. His size was always a deterrent to scouts, and he was neither drafted, nor offered many baseball scholarships after high school. While deciding what to do, Puckett worked on a Ford assembly line. Laid off after a few months, Puckett attended a major league tryout camp. Although he didn’t get signed, he was offered a scholarship to Bradley University in downstate Illinois.

A lot of luck was involved in Puckett’s rise from the projects to the majors. A scout went to see his son play in a summer college league game in Quincy, Illinois. Instead, he was impressed enough by Puckett in center field that he urged the Twins to draft him in the first round.

He zoomed through the minors, and ended up debuting in 1984. But like much else in Puckett’s career, even getting to his first major league game was a struggle. He was playing in Maine, and was supposed to join the Twins in Los Angeles. Puckett was delayed getting there because of mechanical problems on his plane, and ended up having to get his $83 taxi fare ($180 in today’s money) paid for by the team.

All is well that ends well, as he was able to play the next night and went 4 for 5. Puckett had only 17 extra base hits out of 165 and hit .296 the rest of the year, earning him a third place finish in the Rookie of the Year balloting. In the season that had just finished when this card issued, Puckett had nearly 200 hits, but he was still primarily singles hitter. That all changed in 1986. His home run total jumped from 4 to 31, and he drove in 96. Puckett also made the all star team for the first time, and he would continue to make the squad for the next nine years, starting in 1986, 1989, and 1992-1995.

The years between the Twins 1987 and 1991 World Series wins, Puckett continued his consistent hitting, generally hitting above .300 and driving in between 80-100 runs. During this time, Puckett became the highest paid baseball player, and was the first to make over $3 million a year. He was great once again in the 1991 post-season, hitting .429 in the ALCS and driving in four in the World Series.

At 36, Puckett was still near the top of his game. In 1993, he hit .314 and drove in 99. But in spring training the next year, he woke up one morning with blurred vision in his right eye. After waiting half the 1994 season for the problem to correct itself, Puckett was forced into retirement.

Perhaps the most popular player in the game when he retired, that designation surely contributed to his first ballot selection to the Hall of Fame. Although Puckett was a great player in his time, I’d agree with many writers that he was voted in more from what could have been, rather than what was. He had less than 2,000 hits, only 207 home runs, and was never awarded the MVP award. Puckett’s numbers are most comparable to Don Mattingly and Cecil Cooper, and only a few people think they are Hall of Fame worthy. On the top ten comparable players, only Kiki Cuyler has made the Hall.

Even the reputation as a “good guy” that helped his election has been tainted. Puckett was revealed as being a serial abuser and cheater in the early 2000s. The demise of his reputation is chronicled at length in this article. In poor health (his weight had reportedly ballooned up over 300 pounds), Puckett, who had long been the “Face of the Twins,” withdrew from the public eye. He suffered a massive stroke caused by hypertension and died at age 45.

He still holds a soft spot in the hearts of Twins fans (judging by the variety of tribute videos out there) who remember the smiling, jovial Puckett leading their team to glory. And it is always difficult to celebrate the accomplishments of public figures, many who are less than saints in their private lives (see: Wade Boggs, Miles Davis, and pretty much every pop star who was a serial cheater, and/or misogynist). Jocks in high school were often the biggest jerks in person. The confidence and ego needed to make it to that high level of performance often have unpleasant side effects. I guess what I’m saying, is that Puckett is tough guy to judge. Do the subsequent revelations of his abusive relations with women, wipe out the good will earned on the baseball diamond? Or are the two mutually exclusive? 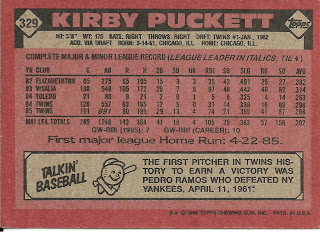 Rear guard: That first home run is significant as it took Puckett well over 600 plate appearances before he hit it. The homer came off Mariners pitcher Matt Young and drove in Tim Teufel and #184 Tim Laudner.

Technically, the Twins have been around since 1901 (they were the Senators until 1961). And, in fact, Ramos had won 67 games with Washington before the team moved to Minneapolis. It would be a mistake to consider Ramos much of a winner. He led the league in losses for four straight seasons, including 1961 when he lost 20.

For his career, Ramos won 117 games, but ended up 43 games below .500. Here is his 1962 card where he is in a non-specific uniform, as he had been traded to the Indians by the time the card was issued.

I have never seen a player with a greater metamorphous at the plate than Kirby in 1986. Up until then,
I thought good singles hitter stayed that way throughout their career until time caught up with them and great power hitters stayed that power hitters. No one ever crossed over from type to another.

So welcome and unexpected and he carries that change until the end of his career.

It was actually 1996 that Puckett sat out just before retiring. I think his amazing wall leap catch in the 1991 postseason also warrants mention.