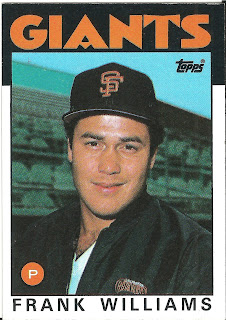 Card thoughts: From a well-known player to one unknown. The magic of baseball card sets.

The player: Williams did not have a good start to his life. An orphan growing up in various foster homes in Seattle (along with a twin brother named Francis), he attended college and made it to the big leagues by age 26. Williams had an excellent rookie season in 1984, winning 9 games and pitching a shutout in his only start. 1985 was a bit of sophomore slump, as his ERA ballooned to 4.19, and he struck out only 54 batters in 73 innings.

He was sent to the Reds in an exceedingly minor deal after the 1986 season. Williams would post his best stats with the Reds, as his ERA did not go above 3. In fact, he had a 2.5 WAR in 1987, an unusually high number for a middle reliever. That season, he appeared in 85 games (sixth in the league), and had a 2.30 ERA in over 100 relief innings pitched. He was just as effective in ’88, although he pitched in about 40 less innings to save his arm.

Signing as a free agent with the Tigers, he had a poor year, possibly because he was pitching in the American League, at that time a way more homer happy league than the National League. But that wasn’t the worst of it. After the Tigers released him, he got in a car wreck and broke his collar bone. Then, his marriage fell apart.

Rootless, he went to Canada, to search out his biological father. In Victoria, Williams became a semi-homeless alcoholic. Bad luck seemed to follow him. Williams overdosed on heroin (thinking it was cocaine), and his twin brother died in a fire. He earned money by signing baseball cards at a card shop (which also picked up his mail for him), scavenging for scrap metal, and the Baseball Assistance Team. A few years ago, Williams tragic life came to an end, as he died of complications from pneumonia. 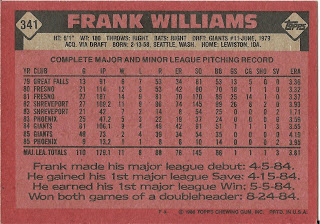 Rear guard: Winning both games of a doubleheader is still rare, even with the advent of the relief pitcher. The double header was against the Mets, and Williams won the first game by pitching one inning, despite giving up a run. In the second game, he finished off the 6th inning for starter Mark Grant with the Giants behind 4-3. A three run outburst in the sixth inning, highlighted by a triple by Chili Davis, gave Williams his second win of the day.
Posted by Jets Break Jaws at 9:06 PM