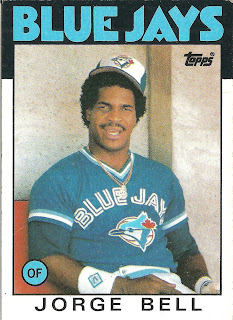 Card thoughts: This is one my favorite cards in the set. As a kid, I wondered what was wrong with Bell. Was he simple minded, or a buffoon? Why on earth is he slouched in the corner with the mien of an overgrown rag doll? Apart from this, Topps, unlike every other card company, had “George Bell” as “Jorge.” In an unusual move, Topps actually corrected their mistake in 1986, making this the last of 4 Jorge Bell cards.

The player: Jorge Bell was a part of a talented young outfield that included Jesse Barfield and Lloyd Moseby. Bell would end up being the most consistent star out of the bunch, although as a fielder he was below average.

Bell was signed by the Phillies, but was left unprotected in the minors after hitting .309 in 22 games at Reading. This allowed the Blue Jays to draft him the Rule 5 draft. Since they had to keep him in the majors the following season, Bell backed up in the outfield and hit .233. With the restriction not in effect in 1982, Bell was sent to the minors for the entire year for more seasoning. But when he came back up for good in 1984, Bell was installed as the starting left fielder for the Blue Jays and had and .824 OPS on the strength of 39 doubles (3rd in the league), 4 triples, and 26 home runs.

Starting in the season shown on this card, Bell became one of the bonfide stars in the mid to late 80s. But, although he was in the top ten in MVP voting for 4 out of 6 seasons, he was only selected for the all-star game once (1987), and that was courtesy of the fans.

Bell’s numbers fell off the next year, but the season looked promising when he cranked three opening day home runs off Bret Saberhagen (a record). Although he still drove in 97 runs, his OPS dropped 200 points. A bounce back year followed where his home runs declined to 18, but he drove in 104 runs (and he also hit a career high 41 doubles).

Bell was signed as a free agent in 1990 by the Cubs for a three-year deal worth $10 million. Although Bell was a star in Toronto, he was considered surly, and for years refused to do interviews (probably because Spanish was his first language). The fans began to ride him for his poor defense after 1987, and he told them to “kiss his purple (expletive).”

I remember thinking that this was a misguided signing by the Cubs. Bell was 31 and a statue in left, a severe liability when he was coming into a league without a DH. Although he hit 25 home runs and drove in 86, he was not beloved. It didn’t help that the other two big signings by the Cubs that off season (Danny Jackson and Dave Smith) were as awful as the team.

But in a silver lining, Bell was traded across town the next season for a young player named Sammy Sosa. Although Bell, now reduced to being a full-time DH for the White Sox, drove in 112 runs and Sosa struggled to hit major league pitching in 1992, it was one of the few good deals then GM Larry Himes pulled off.

His contract up in 1993, Bell didn’t find any takers for a 33-year old whose defensive liabilities forced him into a designated hitter role. His last game turned out to be October 2, 1993 when he started at DH and drove in Norberto Martin with a sacrifice fly. Although the White Sox won the division, he was not put on the post season roster.

Despite Bell’s often contentious relationship with the Toronto fans and media, he is enshrined in the upper deck of the Rogers Centre (the so-called Blue Jays Level of Excellence). 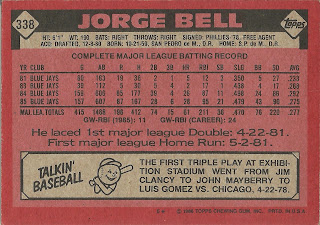 Rear guard: Bell's first of 265 home runs came off Orioles pitcher #110 Scott McGregor and was a solo shot. Bell also had two other hits off the Oriole starter.

Jim Clancy was the pitcher, John Mayberry the first baseman, and Luis Gomez the shortstop. Junior Moore of the White Sox popped up a bunt as the runners were going. Toronto has also turned triple plays against the Yankees and Indians (1979) and the Royals (2012).
Posted by Jets Break Jaws at 10:29 PM