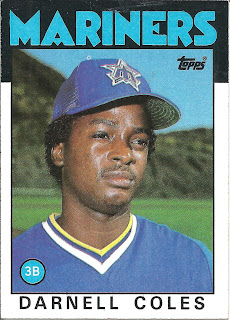 Card thoughts: Where is this photo taken? I don’t believe there are verdant mountains in either Arizona or Florida. Wherever it is, Coles sure looks warm. There seem to be a lot sweaty pictures in this set.

The player: A first round draft pick by the Mariners, Darnell Coles never fulfilled his potential with the Mariners. After a trade to the Tigers, he showed some of the promise the Mariners saw in him. In the end, however, Coles was mainly a bench player who could play the corner outfield and infield spots and provide a replacement level power bat off the bench.

Coles minor league career saw him display some power, but a better ability to get on base, as he rarely struck out more than he walked. The Mariners didn’t really have a starting third baseman at the beginning of 1984, as Barry Bonnell, Larry Milbourne, and Jim Presley all spent time there. Coles was handed the job for about 6 weeks starting in May, but a .190 average got him shipped back to the minors. Coles once again split time between the AAA and the majors in 1985, playing all over the field from May until July, again hitting near the Mendoza Line.

With Jim Presley now established at third, and Coles not exhibiting much aptitude as a utility infielder, fielding terribly at short and third, and only showing some promise in the outfield. He was sent to the Tigers for journeyman minor league pitcher Rich Monteleone. But this turned out to be a blessing for Coles, as he had a career year, slugging 20 home runs and driving in 86 as the Tigers starting third baseman (he also battled chicken pox midseason). The next year, his average sunk to the more familiar .200 level. He was so frustrated, that he once hurled a baseball out of Tiger Stadium, earning a rebuke from manager Sparky Anderson, and Coles was traded soon after to the Pirates, whom he was supposed to help in the stretch run.

It is tough to track the myriad wanderings of Coles. He was back with the Mariners in 1988, and he became their starting right fielder in 1989. In both of these seasons, he returned to the form he showed with the Tigers (70 RBIs between the Pirates and Mariners in ’88, 59 in ’89). But yet another fall off in production in 1990 (.209 between the Mariners and, once again, the Tigers), meant that he would never be a starting player again. Coles would play with the Giants, Reds, Blue Jays, and Cardinals before going to Japan in 1996. After a short stint with the Rockies in 1997, his career would be over.

But like a lot of journeymen, Coles would stay active in the game after retirement. He has managed and coached in the Nationals and Brewers organizations. Coles is the current manager of the Huntsville Stars. 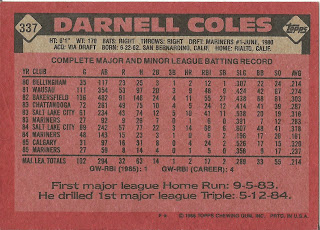 Rear guard: I don't believe that Topps has used the word "drilled" before in its "firsts." It livens up the dry nature of these facts, which usually cited by rote as if by a robot. The triple was Coles' only hit of the game. He later scored on a single by #13 Bob Kearney.
Posted by Jets Break Jaws at 10:48 PM