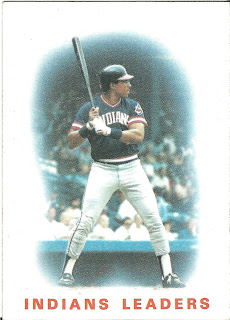 The player: #59 Andre Thornton has already been featured in this blog. I’m surprised the longest tenured Indian isn’t #136 Mike Hargrove. 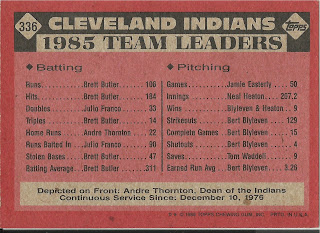 Rear guard: The best position player on the Indians this season was Brett Butler, at a WAR of 4.7. As you can see from the offensive leaders, there was nothing wrong with the hitting, as you had budding stars Brett Butler, Joe Carter, Julio Franco, and Brook Jacoby all putting up good numbers (the Indians were in the top ten in many offensive categories in 1985).

On the other hand, well, the pitchers put up a 4.91 ERA, last in the league. The best of them was Bert Blyleven, who was put out of this misery by being traded to the Twins late in the season. Most of bullpen pitchers had ERAs over 4, and some with ERAs over 6. The starters had three pitchers who lost 10 or more games, yet none who won more 6. Note that Neal Heaton appears as the co-win leader with 9. Heaton wouldn’t have a Topps card until the 1987 traded set. As a kid, this meant that for all intents in purposes, Heaton did not exist.
Posted by Jets Break Jaws at 7:56 PM