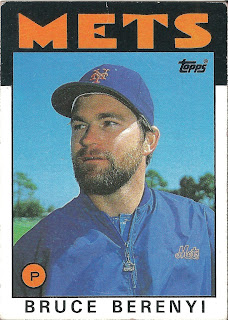 Card thoughts: This is the second Met pitcher Topps found fit to issue a card for, who barely pitched in 1985 due to injury. Didn’t Topps have any flexibility in changing the cards during the season once it was apparent they weren’t going to play much?  Larry Bowa, who played 14 games at the end of the season for the Mets (and 72 with the Cubs earlier) could have been given a card, especially since it was the last season of a long, productive career. For once, I long for the days of airbrushing. At least, unlike #18 Brent Gaff, he did get another card.

The player: Berenyi wasn’t much of a pitcher, even when he played, although he had good genes: His uncle was Ned Garver who had 129 wins for the Browns, Tigers, A’s, and Angels. He was viewed as a phenom when he made the majors. In a time when this was rare, his fastball was regularly clocked at 96, and his slider and curve broke sharply as well. Today, he'd be moved into short relief so he could dominate. Think Carlos Marmol.

When he was young, with cheek of tan, he led several minor leagues in strikeouts. Called up to the Reds in 1981, he struck out a lot of guys, but also walked a lot (he led the league with 77 in 126 innings). In those days, where pitch counts were not closely monitored, no doubt the extreme number of pitches Berenyi needed to pitch deep into games contributed to his later shoulder problems.

Although Berenyi led the league with 18 losses, his ERA of 3.36 shows a lack of run support by the (Small) Red Engine of 1982, although he gave up over 5 runs in 6 of his starts, and he was still too wild (his 96 walks were 3rd in the league, and his 16 wild pitches were 4th). The Yankees tried to acquire him for Rick Cerone (after all, despite his losses his WAR was over 4), but Cerone refused to waive his no-trade clause. Another losing season followed (9-14, another 102 walks), and then, in 1984 with Berenyi’s ERA at 6, the Reds traded him to the Mets in June for a bunch of minor leaguers.

With the Mets, he had his first winning season since 1981 (9-6). But, he tore his rotator cuff two starts into the season, and was done for the year. He made the Mets squad in 1986 as a long reliever and spot starter, but his ineffectiveness banished him to AAA, so he didn’t make the Mets post-season roster. A year after, he pitched a few games for the Expos AAA affiliate before his release. 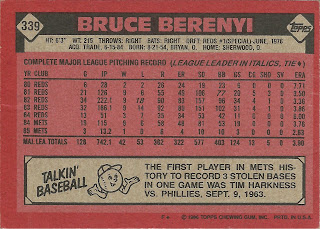 Rear guard: Tim Harkness had only 7 career stolen bases, and he stole 3/4 of his 4 steals in 1963 in just that one game. This was a strange game, as the Phillies used six pitchers to lose a 6-3 game (at the time, it was rare to see more than three pitchers in a game that wasn't a blowout). It must of been an experiment of #81 Gene Mauch's. Anyhow, the unlucky catcher was Clay Darlymple.
Posted by Jets Break Jaws at 10:25 PM