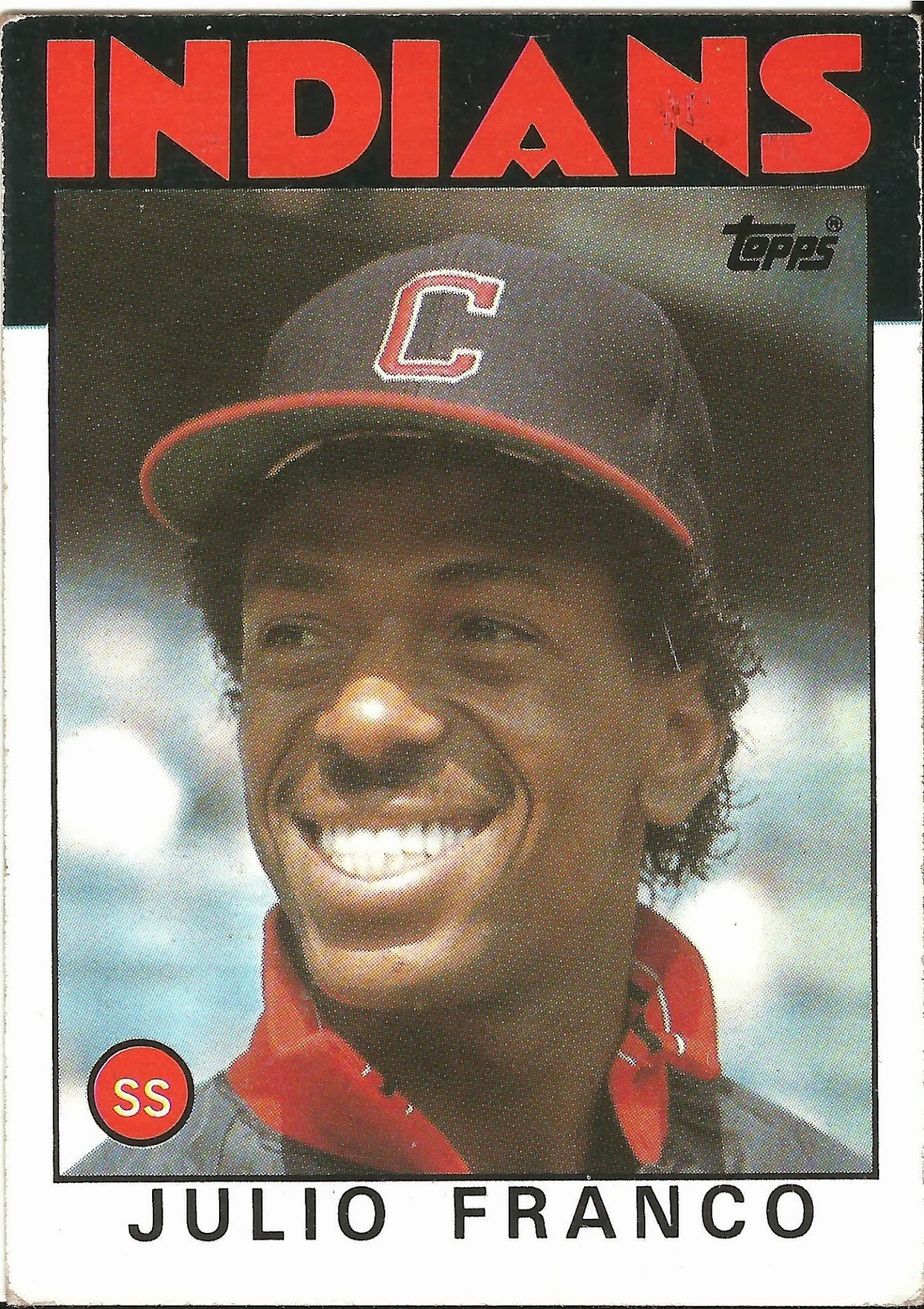 Card thoughts: Julio Franco: ageless wonder. This is the last player from this set to retire . . . and it isn’t even his rookie card.

The player: Franco, who was signed in 1978 by the Phillies, did not retire until 2007 when he was 49.  The man had three careers, essentially. As a young man, he was one of the top hitting shortstops in the game; he spent five separate seasons abroad in his mid to late 30s, in Japan, South Korea, and Mexico; and then, he came back improbably as a 40 year old and spent about a decade as one of the game’s top pinch hitters and bench players.

Franco pretty much flat out hit as soon as he was signed, swatting over .300 ever year he spent in the minors. He was yet another great Phillies prospect in the early eighties who they sent away. Franco was traded to the Indians in 1982 with four other players for Von Hayes (who, to be fair, turned out to be a really good player for the Phillies).

Very quickly, Franco became a really good hitter, with a knack for driving in runs, despite not having much power. His rookie year, he drove in 80 runs, despite slugging just .388 (he came in second in Rookie of the Year voting to Ron Kittle). Franco
wasn't the prototypical cleanup hitter, however, as he also had great speed, reaching double digits in steals in each of his first nine seasons. The one aspect of his game that was lacking, however, was his play at shortstop where he routinely led the league in errors. Franco was also prone to hitting into double plays, as he used the heaviest allowable bat, which led to a lot of hard hit balls at infielders.

It is hard to pick a standout year for Franco when he was with the Indians, because he was so remarkably consistent.  Between 1984 and 1988 he generally scored around 86 runs; had about 180 hits; drove in about 70 runs; and hit about .299. Despite this, Franco never made an all star team, overshadowed by Tony Fernandez. His big break came when he moved to second for the 1988 season, just before being part of a large trade with the Rangers. The Indians sent him to the Rangers for #328 Pete O’Brien  and youngsters Jerry Browne and Oddibe McDowell.

However, in 1992 he was injured most of the year, the only significant time he ever spent on the disabled list. The injury ended his career at second. From now on, Franco would either play first or DH. He spent one last season with the Rangers, where he returned to form, hitting 14 home runs and driving in 84, before signing with the White Sox. Mainly used as a designated hitter, Franco’s 20 home runs and 98 runs batted in were both career highs (and this was a strike shortened season).

Franco signed with the Chiba Lotte Japanese League team for the 1995 season, and he earned the fielding award for his play at first, showing that he could still play the field. 1996 found him again back with the Indians, where he started at first and hit .322. But Franco was now 37, and the Indians felt he was too old. Midway through the 1997 season, he was released, and ended the year with Brewers, who also released him.

For most players that would be it. An out of work 38 year old with declining fielding skills, Franco was not in much demand. But he refused to stop playing. From 1998-2001, he was on a worldwide odyssey, playing again in Japan (hitting .290 for Chiba Lotte), in South Korea, and Mexico (.437 for the Mexico City Reds in 2001). The Braves recruited him for the stretch drive that season, and the 43 year old hit .300 off the bench.

But even more amazingly, in each of the next four seasons, Franco appeared in over 100 games, even becoming the starting first baseman in 2002. Later on, he served as a well-used backup for youngsters Robert Fick and Andy LaRoche.

After becoming the oldest position player in major league history in 2004, the Braves finally cut ties with the ageless wonder in 2005, but he was quickly snatched up by the Mets, with who he hit .256 in a season and a half. Franco finally hung it up in the majors in 2007 at age 48. Of course, Franco would play one more season in Mexico at age 49 after his major league career had finished.

Franco retires with a lot of age-related records, including oldest player to hit a grand slam and oldest to hit a home run. He was also the last player eligible to wear a batting helmet with no ear flaps, having been around before that was standard. For his career, he played 25 years, amassed 2,586 hits, and hit .298. 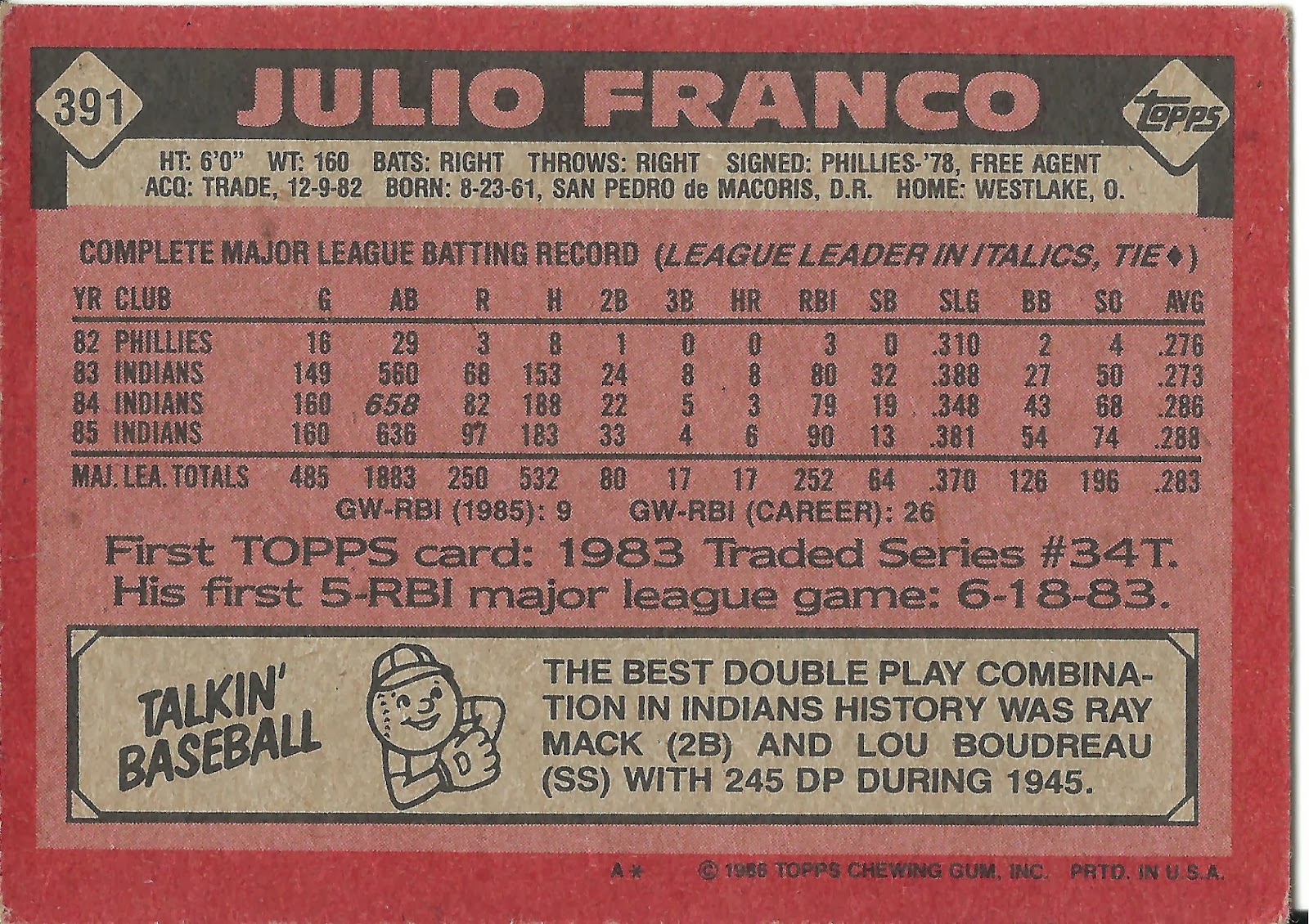 Rear guard: Lou Boudreau was the rare all-around shortstop in his era. He made the hall of fame primarily because of his hitting, yet he led shortops in fielding 8 out of 9 years. He is 19th all time in double plays turned by a shortstop. Ray Mack was his primary double play partner from 1940-1943, not in 1945 (when I assume he was in the war). I believe 1943 is the year Topps is referring to (yet another Talkin' Baseball error!).
Posted by Jets Break Jaws at 10:00 PM