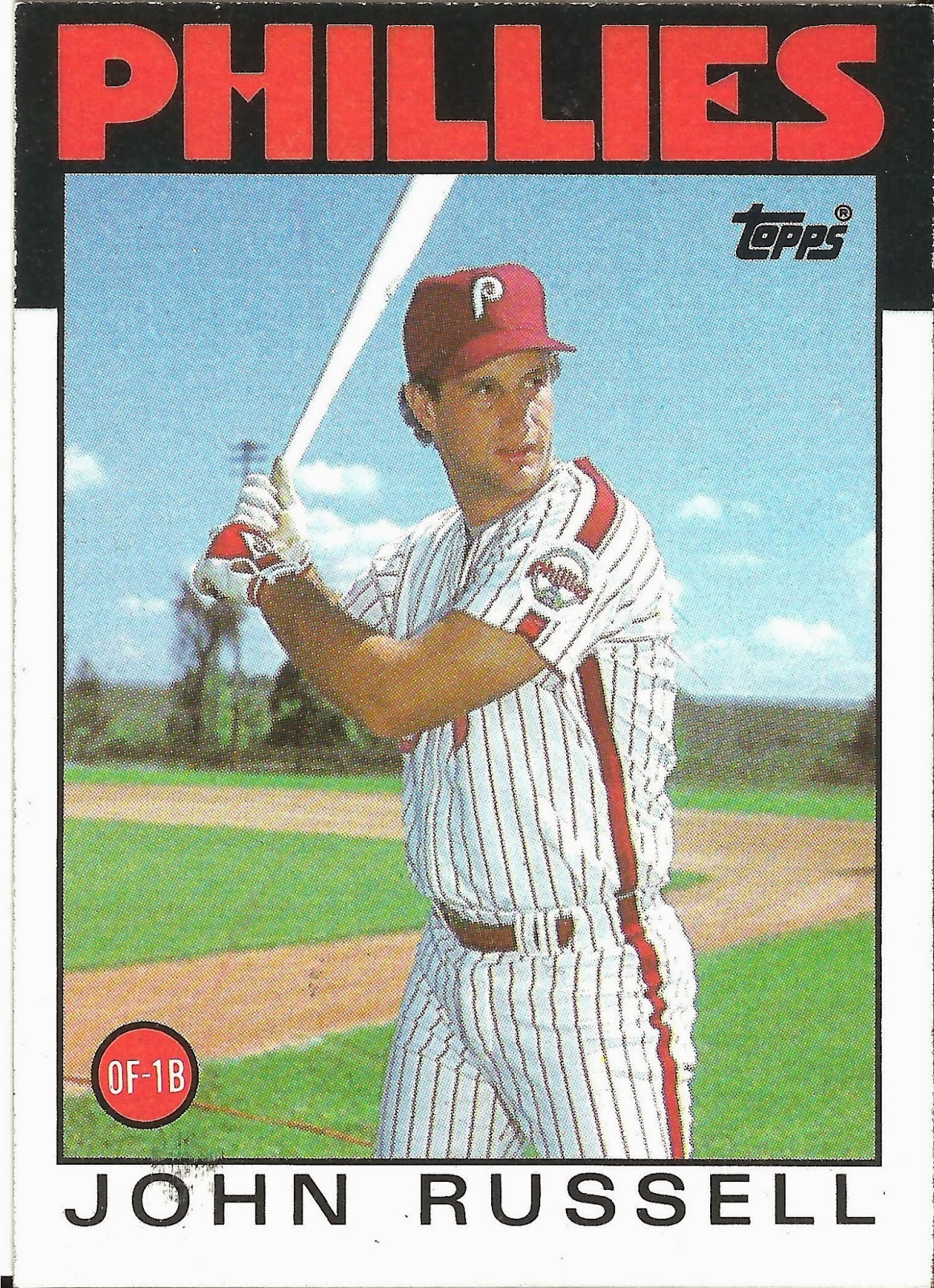 Card thoughts: This is a classic Topps pose for a hitter. Before the card companies figured out how to take good action shots, you’d find pretty much all hitters posed in this way (when they weren’t fake fielding a ball in foul territory).

The player: John Russell is the unusual player who switched from outfielder/first baseman to catcher later in his career, rather than the other way around.

A first round draft pick of the Phillies in 1982, Russell spent three years honing his craft at AAA Portland before being called up for good in 1985. Although his .218 batting average wasn’t too impressive, he had a decent power stroke. Pressed into service at catcher when #263 Darren Daulton was out for most of 1986, Russell had a surprisingly good season, hitting 13 home runs and driving 60 while slugging .444—great numbers for a catcher, especially one with not much experience at the position. Of course, there was a reason Russell was not used much at catcher. He only caught 24% of would be base stealers; he led the league in passed balls (12); and he was well below average in total fielding runs (-16).

With the return of Daulton in ’87, Russell’s playing time was drastically cut. He batted just .145 as the backup leftfielder, and spent most of that and the next season at AAA Maine. So, like a piece of chattel, he was sold to the Braves at the end of spring training in 1989. Staying in the majors all year, he saw time at six different positions (including pitcher). Despite having a reputation as a poor catcher, he actually ranked in the top ten in caught stealing that season. But with an improvement in defense, came a regression at the plate as his .185 batting average was accompanied with little power (just 4 extra base hits and 9 RBIs in 159 at bats).

Moving to the Rangers in 1990, Russell would spend the rest of his career in the organization. His best season as a backup would occur in that first season (most of the rest, he was the “third catcher” kept in reserve in the minors).  In 1990, he had a .273 average and .682 OPS, the highest in his career.

Russell is better known today as the former manager of the Pirates (during a few of their “lost” seasons). Long a top managerial prospect (he managed at: Elizabethton, Fort Myers, New Britain, and Edmonton), he joined Lloyd McClendon’s staff as the third base coach for the Pirates from 2003-2005. This was a job he wasn’t really good at (he had a habit of waving runners home to their certain doom at the plate), which made it surprising that he was brought back as a manager in 2008. In his second go round with the Pirates, they were still hapless and Russell had a 186-299 record in 2 ½ seasons. His .384 winning percentage was the worst of any manager who managed during the Pirates 20 year losing streak and the worst since Fred Haney’s .353 winning percentage from 1953-1955.

However, Russell landed on his feet, becoming the Orioles third base coach in 2011. But years of catching had ruined Russell’s knees, and he had to switch places with Willie Randolph for the 2012 season, when he became the bench coach. 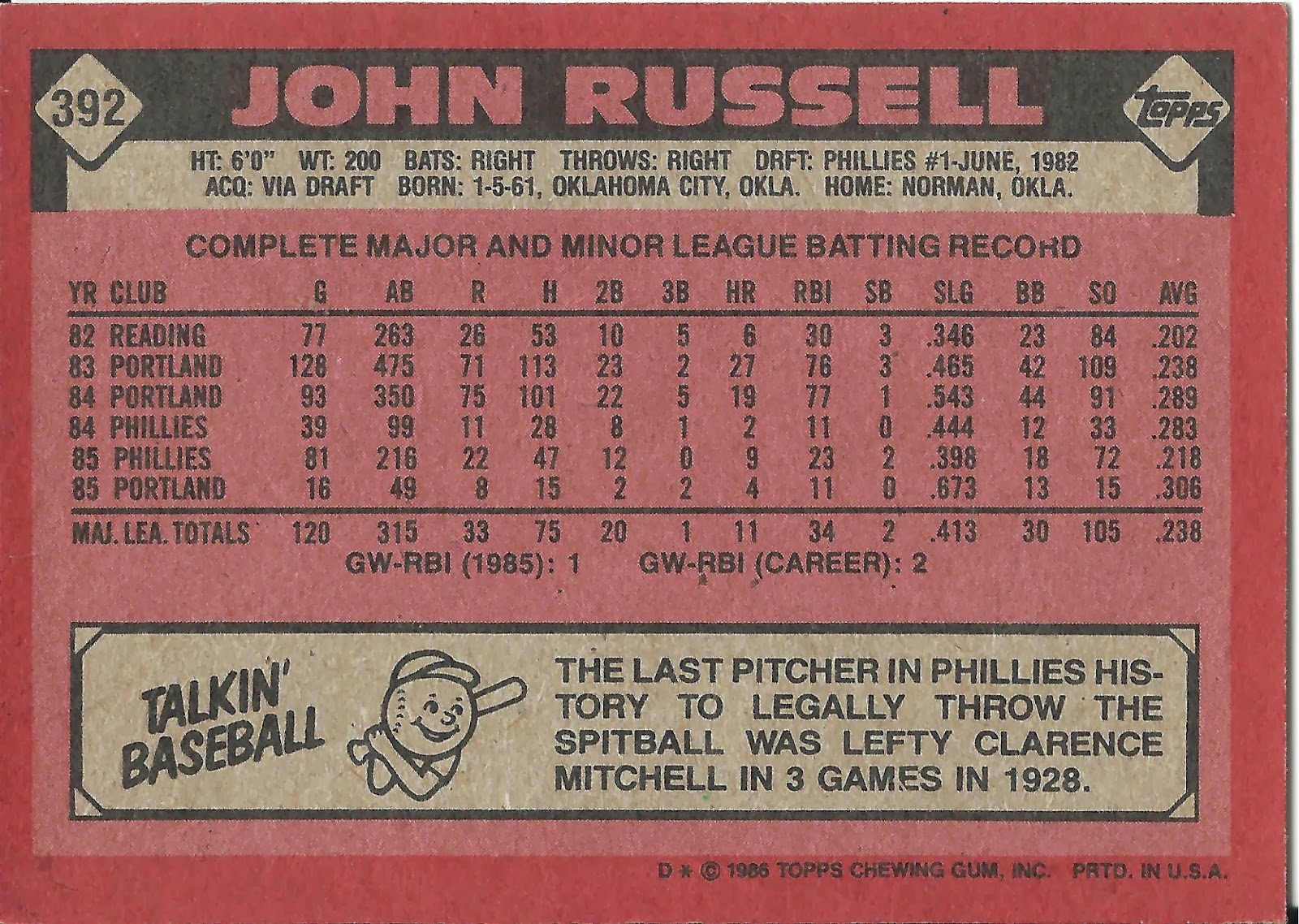 Rear guard: Yes, the spitball was legal until Ray Chapman was killed by a spitball in a poorly lit game in 1920 (the spit was often mixed with tobacco juice, darkening the ball). The ban wasn't absolute at first--each team could designate two spitballers who were still allowed to throw the pitch. Finally, just 17 pitchers who used the pitch as their primary out pitch kept the exemption.

Mitchell pitched until 1932 (with the Giants). He was a terrible pitcher (his career high in wins was 13 at age 40, this at a time pitchers figured in more decisions). The last pitcher in baseball to legally throw the spitter was Jack Quinn in 1933.
Posted by Jets Break Jaws at 10:13 PM