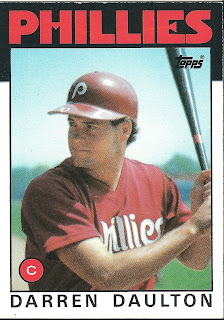 The player: Darren Daulton is one of the more popular ex-Phillies, perhaps because he was the clubhouse leader for several winning Phillies teams in the early 90s. This is his rookie card.


Daulton, nicknamed “Dutch,” spent several years backing up Ozzie Virgil and Lance Parrish, finding it hard to dislodge the veterans. He did not hit well as a backup, struggling to hit over .200 between 1985 and 1988. The trade of Parrish to the Angels opened up the starting role for Parrish, but initially he hit only .201, but with 8 home runs and 44 RBIs.

Knee injuries would curtail the rest of Daulton’s career (not helped by having to play his home games on an artificial surface). He had a .929 OPS in 1994, before going down with the injury, and only managed to play in 98 games in 1995, and 5 in 1996, before being traded to the Marlins midway through the next season for reserve outfielder Billy McMillon.

The Marlins were World Series bound, and Daulton’s final major league at bats were in the series. He hit an astonishing .389 and scored 7 runs in 7 games while earning a World Series ring. Deciding to go out on top, Daulton retired after the final out.

Daulton has been arrested several times for DUI (in 1988, 2001, and 2003), and seems to be a bit of a reckless driver in all events, having had his license suspended several times for other moving violations. An odd bird, Daulton believes in ESP and the occult (including numerology—not surprising as a former big leaguer), and has authored “If They Only Knew” about the subject, a book not very favorably reviewed. He also spends time with his foundation, and running Darren Daulton Enterprises (although I’m unclear how Daulton has expertise on energy and telecommunications, the focus of the company). 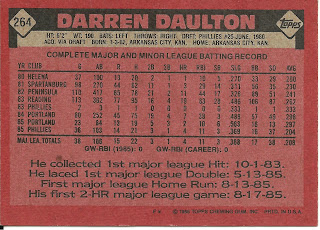 Rear guard: Lot to digest here, so I'll pick a "first" at random. Well, Daulton's first (and only) hit in the 1983 season came off Pirates reliever Cecilio Guante. He later came around to score on Jeff Stone's triple.
Posted by Jets Break Jaws at 10:14 PM