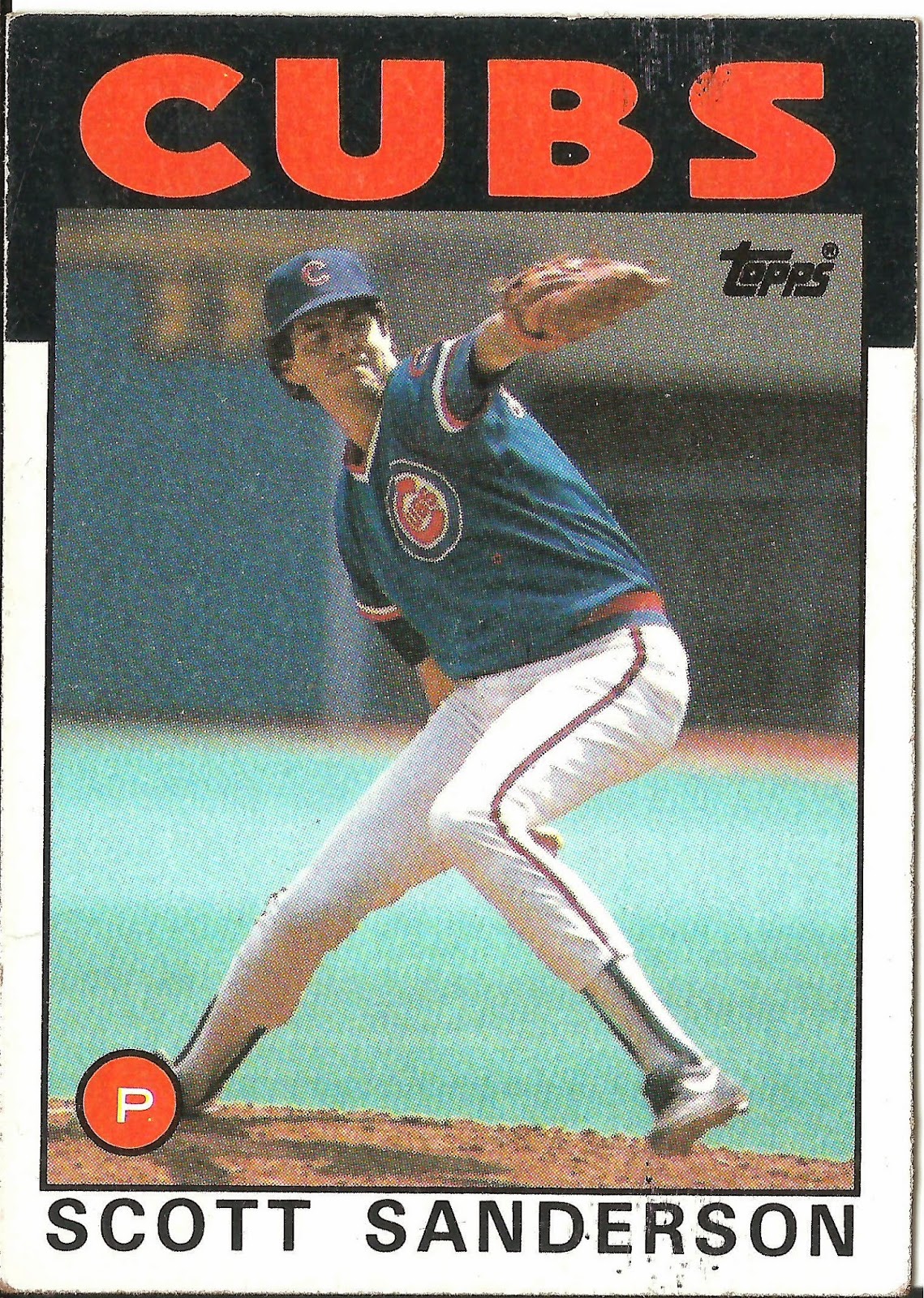 Card thoughts: Scott Sanderson was always one of my favorite Cubs. I remember this season, when he was perhaps the only effective Cubs starter.

The player: A local boy (in terms of the Cubs), as an amateur he pitched for the United States nation team, especially excelling the 1975 International Cup (ERA 0.60). After just one full season in the minors, Sanderson was called up to the Expos mid way into the 1978 season. His 4-2 record and 2.51 ERA augured great things for the young Sanderson.

But the next season, he lost his starting job for a bit, and was sent to the bullpen—a pattern that would repeat itself for the rest of his career. In 1980, with the Expos challenging the Phillies for the division title, Sanderson went 16-11 with a 3.11 ERA. He continued his strong pitching in the strike-shortened 1981 season (9-7 with a career best 2.95 ERA), but stamina was always an issue with Scott, and he tended to fade down the stretch. He also tended to give up home runs, and in 1982 he gave them up to three consecutive Giants on July 11th. Somewhat redeeming himself, he later hit a grand slam at Wrigley Field.

A collision with Bill Buckner at first (again, with a Cub), wrecked his knee in ’83, and began several injury filled years. But the Cubs didn’t know that at the time, and they sent their top third base prospect (Fritz Connally), first base prospect (Carmelo Martinez), and a serviceable reliever (Craig Lefferts) to the Padres as a part of a three team deal to acquire him. Sanderson spent great portions of 1984 and 1985 on the DL, but when he started, he was effective.

It was clear Sanderson needed a change of scenery. He left as a free agent in 1989, signed with Oakland, and started a three year renaissance in the American League. With the powerful A’s backing him, Sanderson won a career high 17 games, despite having 3.88 ERA while pitching in pitcher-friendly Oakland Coliseum. Despite being the #3 starter during the season, Sanderson would not get to start in either the ALCS or World Series that year, as Tony LaRussa elected to go with Matt Moore.

Seeing his options limited in Oakland, Sanderson next signed with the Yankees. Once again, a powerful offense masked some of his ineffectiveness. Despite going 16-10, and making the all-star team, Sanderson was still a pitcher with a high ERA, and a tendency to give up gopher balls. This was dramatically shown in 1992, when he gave up four straight home runs to Kent Hrbek, Shane Mack, Kirby Puckett, and Randy Bush to tie a major league record.

With a 4.93 ERA in 1992, and a long injury history, Sanderson found it hard to latch onto a club in 1993, but finally signed with the Angels, going 7-11 with a 4.46 ERA. The Giants picked him up late in the season after he was released, and he pitched better for them (4-2, 3.51 ERA in 11 starts), but his manager Dusty Baker seemingly had no confidence in him, as he was passed over as a starter on the final day of the season with the playoffs on the line in favor of rookie Salmon Torres.

Signing with the White Sox in 1994, he had an 8-4 record and a 5.06 ERA when the season ended early by the strike. Signing with the Angels, he was ineffective and injured in 1995 and 1996, his last two seasons. Sanderson managed to have a 19 year career, and won more (163) than he lost. In retirement, he has mostly worked as a sports agent, representing Frank Thomas, Josh Beckett, and Lance Berkman, among others. 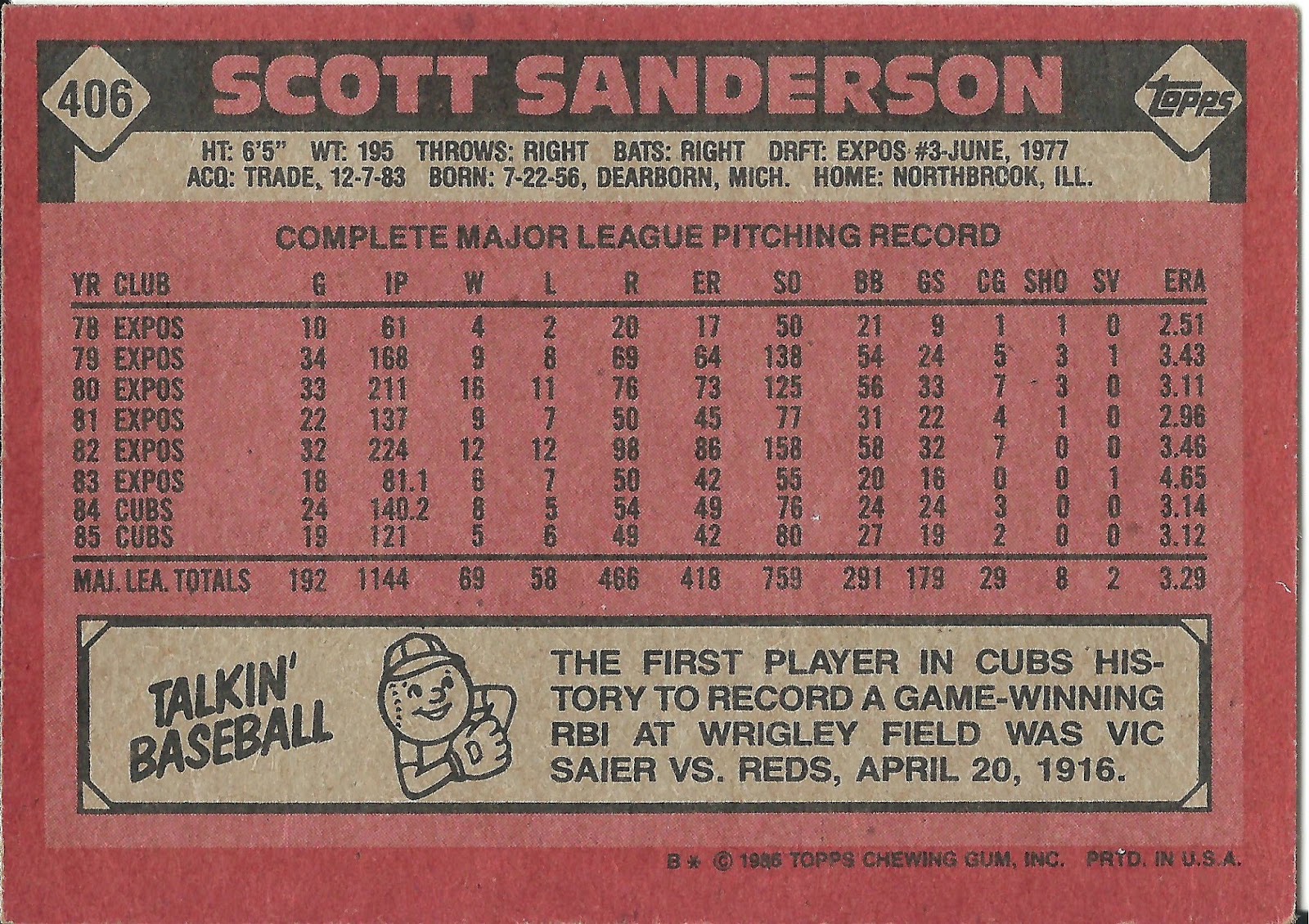 Rear guard: Vic Saier was considered a slugger by 1910s standards. But by 1916, injuries had begun limiting his effectiveness (he was out of baseball at age 28 after suffering a bad leg injury). Wrigley Field was used (and built by) by the Chicago Whales before the Cubs moved in in 1916. Saier's RBI came on a sacrifice fly in the 11th inning off Al Schulz. It was the Cubs home opener at Wrigley that year. Coincidentally, the Cubs will be playing their 98th home opener there later this afternoon.
Posted by Jets Break Jaws at 11:49 AM