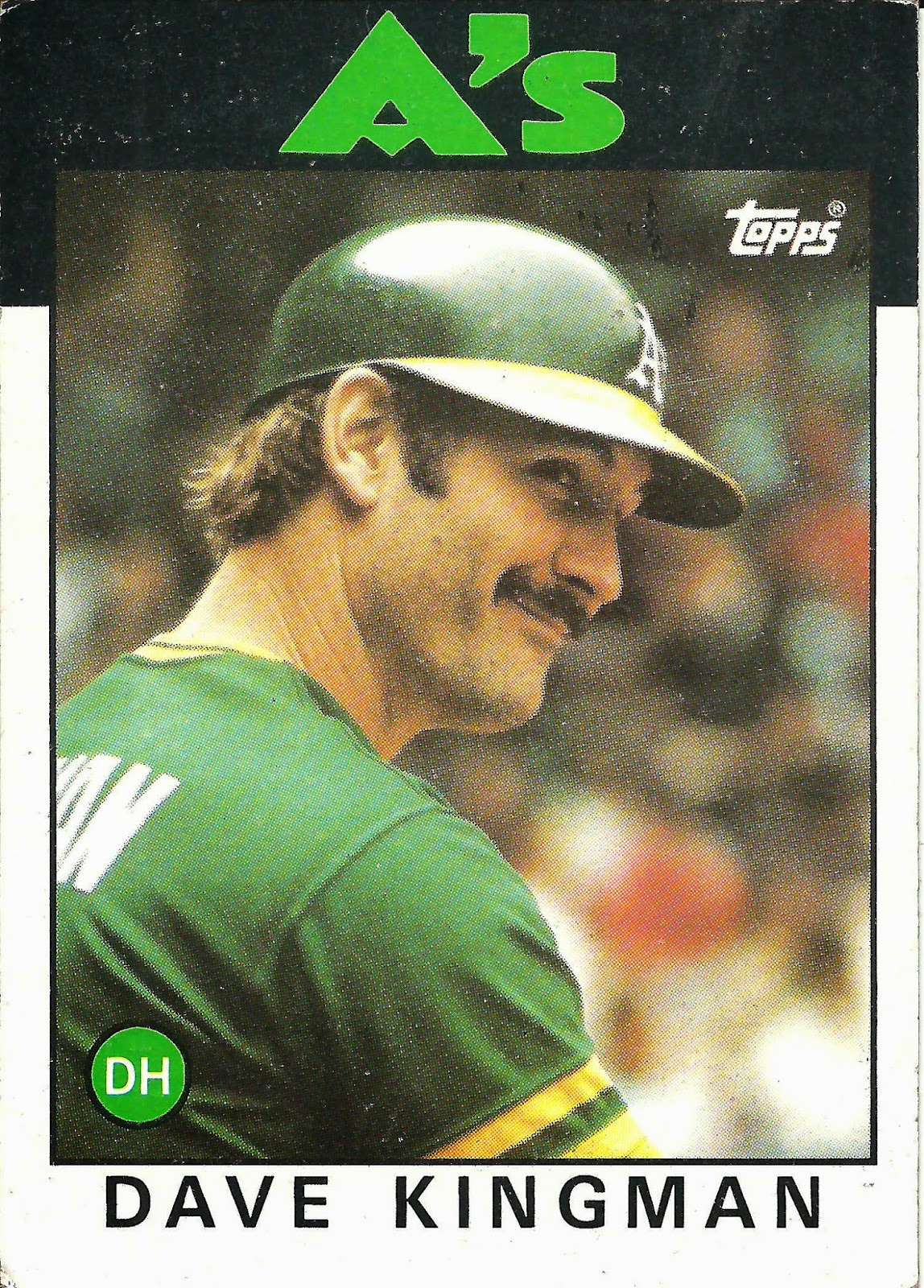 Card thoughts: Dave Kingman was not known for his sunny demeanor, so I’m guessing that is a smirk and not a smile on his face. Kingman, along with Bill Buckner, were my “Favorite” players as a five year old. So says the vague mist of my Bruner Street memories.

The player: Kingman was nicknamed “Kong” because his titanic home runs, especially at Wrigley Field. He legendarily hit a ball out of the stadium 550 feet, landing on a porch three doors down from Waveland on Kenmore Avenue.

A tall, gangly man, Kingman was not much of a fielder, runner, or hitter, other than home runs. With a long, looping, uppercut swing, Kingman generally would only hit home runs or singles, but he often struck out too, which led to low RBI countsand batting averages, despite the home runs.

As a kid, Kingman moved around a lot, as the family followed the patriarch in his career as a United Airlines executive, eventually ending up in Chicago. In high school (not surprising due to his lean, tall frame) Kingman lettered in basketball, but was not known as a baseball player (although he did play American Legion ball).

At USC, he began as a pitcher in 1969, but switched to the outfield a year later, hitting .355 and slugging .702. This led to him being drafted in the first round by the Giants. Assigned to AA Amarillo, Kingman slugged 15 home runs in just 210 at bats. Moving up to Phoenix the next year, he apparently got the nickname “The Hammer” while leading the PCL in home runs with 29.

Believe it or not, the lanky Kingman began his major league career as a third baseman.  Called up near the end of ’71 season, he hit his first “moon shot” off of a parked car in the lot outside Shea Stadium. He also suffered through a bout of appendicitis, leading to emergency surgery.

In 1972, he started at third, but his fielding was so atrocious, Steve Ontiveros had to take over after about 60 games. Reduced a utility role the following season, Kingman continued to hit for low average, and field terribly. The only tool her really had was his power . . . but that was mega-plus tool, as his slugging percentage was consistently 200 points higher than his batting average.

The power wasn’t enough for the Giants however, and he was sold to the Mets in 1974. This is where Kingman really blossomed, hitting 36 home runs in 1975, and another 39 in 1976, where he was named the starting rightfielder in the All-Star game. In 1977, everything fell apart for Kingman, as he eventually played for four teams (the Mets, Padres, Angels, and Yankees). Among all the stops, Kingman managed to hit 26 home runs and drive in 78.

Kingman became a star again for the Cubs in 1978, where he would have his best seasons. Kingman and Wrigley Field was a match made in heaven, especially when the wind was blowing out. Kingman hit above .250 for the first time all three years he spent with the Cubs, which led to his monstrous 1979 season, where he led the majors in home runs (48) and slugging percentage. He also twice hit three home runs in a game, and hit five home runs in two games.

Kingman once again went from hero to goat in 1980, as he was injured most of the year, and he dumped a bucket of ice on a reporter. Perhaps Kingman was jealous. His nearly unreadable (ghost-written) column ran for a time in the Chicago Tribune, prompting famous writer Mike Royko to write a parody column with the byline “Dave Dingdong.” A private person, Kingman asked his teammates not to comment on his private life, and stated he didn’t think about baseball after the game was over.

The Cubs tired of his surly attitude, and he was sent back to the Mets for Steve Henderson. New owner Nelson Doubleday was reacquiring all of the stars they traded away in the 70s (unfortunately, all were well past their prime). Kingman proved to be unpopular in his return, and dubiously led the league in home runs in 1982 while hitting just .204, less than Cy Young award winner #120 Steve Carlton.

With the arrival of Keith Hernandez, Kingman played sparingly at the end of 1983. He was gone to the American League by 1984, in his Natural role as designated hitter, one he would fill the rest of his career with Oakland. He hit over 30 home runs each of the three years he played with the A’s, his best season being 1984 when he hit .268 with 35 home runs and 118 RBIs. 1987 was his last year, despite hitting 35 home runs and driving in 94 (but hitting .210).

With a career total of 442 home runs, Kingman was the first person with over 400 home runs not to make the Hall of Fame (steroid-era players will probably break that mark). Part of the problem was his 1800 or so strikeouts, fourth all time when he retired, and .236 career average. His home run total, however, is really impressive when you consider he played in a low home run era. 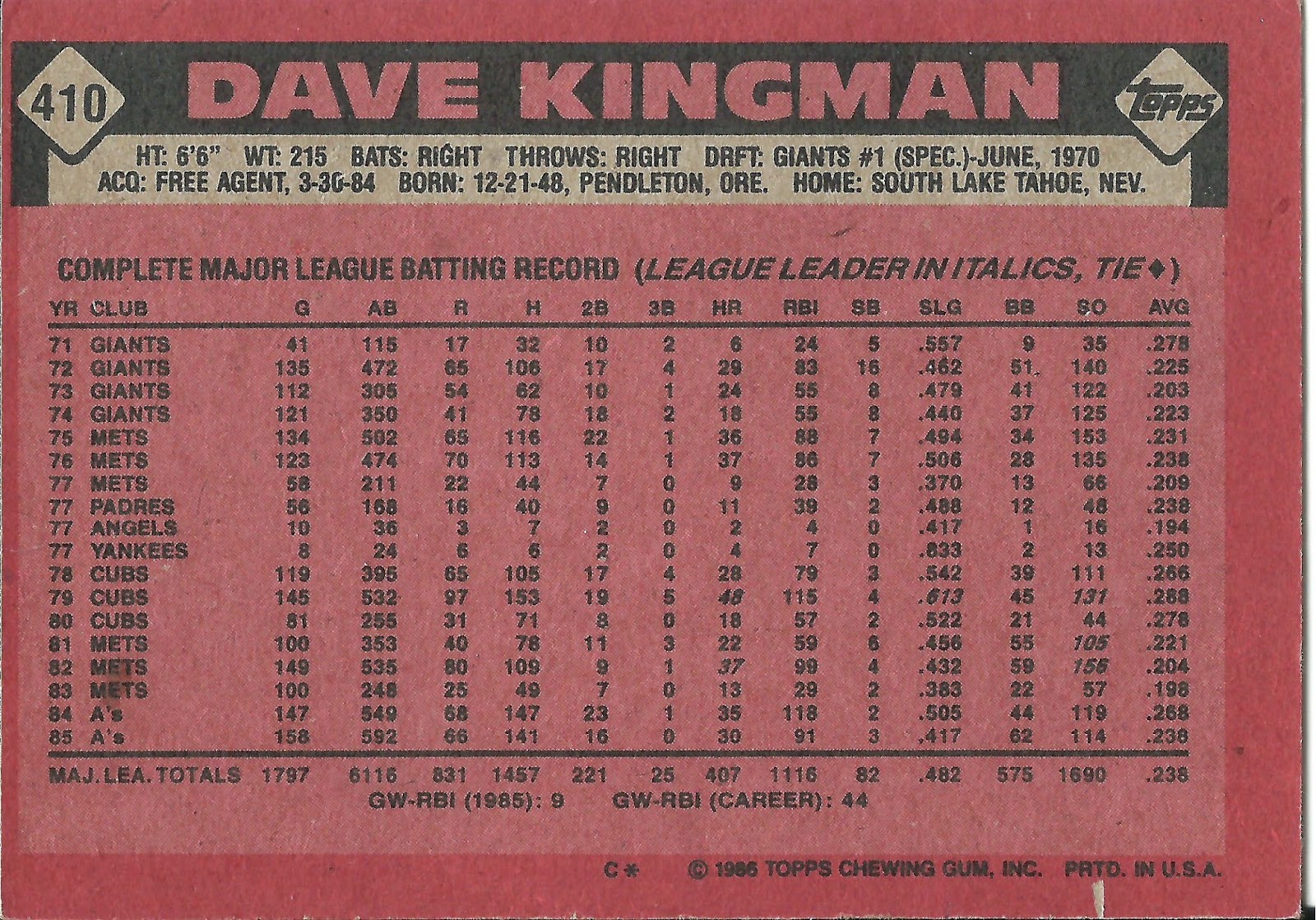 Rear guard: Miscut! Highlights of Kingman's 1985 season include hitting his 400th home run on August 10th against Seattle. The blast came off of Matt Young.
Posted by Jets Break Jaws at 9:29 PM

Kingman's 1977 season was always fascinating to me, because not only did he play for four teams, he played in each of the four divisions that existed at the time.