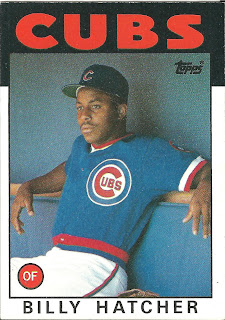 Card thoughts: You don't often see a ballplayer as relaxed as this. Hatcher's  blue away jersey is blending into the blue seat. This is cruelly appropriate: Hatcher would ride the pines as the 5th outfielder for most of the 1985 season, his talent invisible to manager Jim Frey.

The player: The Cubs had a lot of great position players in the minors in the early 80s: Shawon Dunston, Joe Carter, Pat Tabler, and Mel Hall all come to mind. Hatcher was another prospect in this mold. His calling card was blazing speed--he stole 84 bases in the California League in 1982. Unfortunately for Cubs fans, Hatcher would be traded in 1986 to the Astros for serviceable, unspectacular outfielder Jerry Mumphrey.

For the rest of his career, Hatcher always seemed to come up big for playoff bound teams. His best season with the Astros was in 1987 when he scored 97 runs, drove in 63 more, and hit .296 with 70 steals. He also got caught that year with a corked bat, which, using the time honored excuse, he claimed belonged to a pitcher. He kept up his hot hitting in the playoffs, hitting 2 home runs and batting .280 in the 6 game ALDS. After slumping with the Astros a couple of years later, he was sent to the Pirates for veteran Glenn Wilson, and then to the Reds. Once again, in the Reds' World Series winning season of 1990, Billy Hatcher shined. Although his regular season stats were average, in the World Series he hit an incredible .750 with 7 straight hits. He also scored 6 runs and had 4 doubles.

The rest of Hatcher's career alternated between starting and as a reserve outfielder. He would hit .262 in his last full-year as a regular with the Reds (1991) and a solid .287 with 71 runs scored for the Red Sox in 1993. But without the bright lights to motivate him, after that year Hatcher drifted from the Phillies to the Rangers as a reserve who could be counted on for the big hit and bursts of speed off of the bench but not much else.

After his 12-year career ended in 1995, Hatcher has gone on to have a long career as a coach at the major league level. He was a coach for the Rays from 1998-2005 and currently serves as the Cincinnati Reds' first base, outfield, and baserunning coach, a job he's held since 2006. 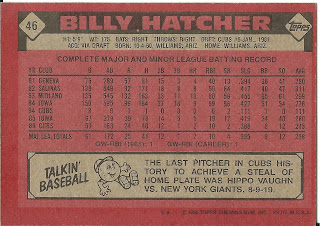 Rear guard: What a horribly miscut card! There is no record of Vaughn stealing home in this game. He did score a run, but it looks like it was on a fielder's choice. Hippo Vaughn also led the league in innings pitched and strikeouts during the 1919 season.
Posted by Jets Break Jaws at 10:18 PM