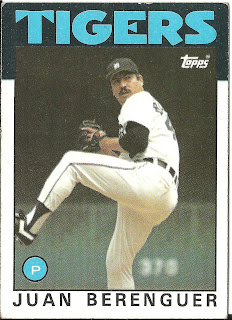 The player: Juan Berenguer was an inconsistent starter with the Mets, Royals, and Blue Jays until he signed with the Tigers in 1982 after leading the league in losses the year before. He found his niche as a starter for the next couple of years winning 9 games in 1983 and a career high 11 in the World Series winning year of 1984. He did not pitch in the post season that year, however. His transition to the bullpen during the year shown was not successful and he was traded to the Giants the following year for oft-traded Dave LaPoint, future star Matt Nokes, and Eric King. After a good year in San Francisco, Berenguer signed with the Twins where he had his greatest success. A hard throwing middle reliever when that was a rare commodity, he captivated the hearts of sun-deprived Minnesotans with his on-the-mound antics every time he struck out a batter. Nicknamed "Senor Smoke" and "El Gasolino," Juan consistently won about 8 games a year and had an ERA in the 3s from 1987-1990. But he was terrible in the '87 World Series, losing a game and giving up 5 runs and 10 hits in just 4 1/3 innings.

Despite this, Berenguer starred in a wince-inducing video dreamed up by a bunch horrible ad exec types where a terrible "rap" (I use this term in the loosest sense) was performed by a bunch of faceless studio musicians while Berenguer showed off his signature strikeout move. I kid you not.

Berenguer had one more good year in him with the Braves, where he signed in 1991. In his only season as a closer, he saved 17 games and had a stellar 2.29. In a bit of bad luck, Berenguer was wrestling with his kids on a off-day and broke his arm, preventing him from going to the World Series with the Braves. He never really recovered from that injury and his career ended a year later with the Royals. I guess playing in Minnesota gave the Panamanian a taste for hockey: His son currently plays minor league hockey. 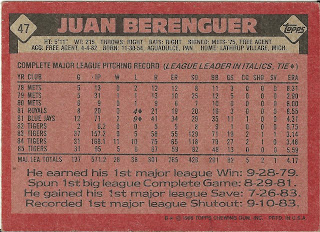