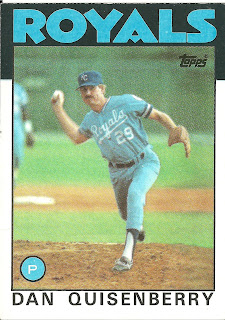 Card thoughts: Another card that looks like it was taken underwater in a dirty lake, with the blurred blue-green background. Other than that, what you get here is the pitching motion that made Dan Quisenberry famous.

The player: Quisenberry was a marginal prospect with no plus pitches until his manager in 1980, Jim Frey, suggested that he emulate Kent Tekulve and sling the ball submarine style. Relying on guile and deception  rather than strikeouts, he instantly became the top reliever in the American League, leading the league in saves every year but one from 1980 until 1985, with a career high 45 in 1983. He also led in games pitched in 1980, 1983, and 1985. Unlike relievers today, Quisenberry regularly logged over 100 innings in relief a year.

All those stressful innings added up, however, and after the year shown on this card he would never again have over 20 saves or pitch more than 100 innings. By 1988 he was relegated to mop-up duty and despite signing a lifetime contract with the Royals, he was released and signed by the Cardinals. After one more effective year in 1989, he signed with the Giants but blew out his rotator cuff at age 37 and retired. He retired as was one the greatest control pitchers of all time, as well as being one of the first pitcher to be an exclusive closer.

Quisenberry became a published poet after his career ended. Sadly, he died of brain cancer at age 45 in 1998. I reprint one of his poems below (appropriate to this blog):

BASEBALL CARDS
that first baseball card I saw myself
in a triage of rookies
atop the bodies
that made the hill
we played king of
I am the older one
the one on the right
game-face sincere
long red hair unkempt
a symbol of the ’70s
somehow a sign of manhood
you don’t see
how my knees shook on my debut
or my desperation to make it
the second one I look boyish with a gap-toothed smile
the smile of a guy who has it his way
expects it
I rode the wave’s crest
of pennant and trophies
I sat relaxed with one thought
“I can do this”
you don’t see
me stay up till two
reining in nerves
or post-game hands that shook involuntarily
glory years catch action shots
arm whips and body contortions
a human catapult
the backs of those cards
cite numbers
that tell stories of saves, wins, flags, records
handshakes, butt slaps, celebration mobs
you can’t see
the cost of winning
lines on my forehead under the hat
trench line between my eyes
you don’t see my wife, daughter and son
left behind
the last few cards
I do not smile
I grim-face the camera
tight lipped
no more forced poses to win fans
eyes squint
scanning distance
crow’s-feet turn into eagle’s claws
you don’t see
the quiver in my heart
knowledge that it is over
just playing out the end
I look back
at who I thought I was
or used to be
now, trying to be funny
I tell folks
I used to be famous
I used to be good
they say
we thought you were bigger
I say
I was 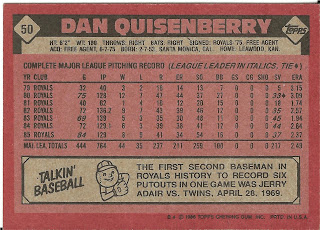 Rear guard: On a lighter note, look at the strikeout and walk totals. Absolutely miniscule for a closer. Adair was a solid fielding second baseman who like many of his fellow middle infielders at the time could barely hit a lick. He was released in 1970 as he was about to board the team plane, a particularly callous action by the Royals.
Posted by Jets Break Jaws at 10:51 PM