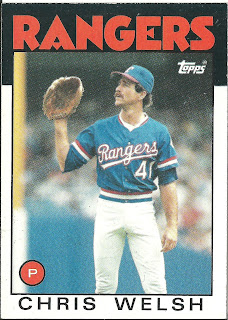 Card thoughts: I wish this card would have shown Chris Welsh's unusual pitching motion like this one. Here's just a ho-hum picture of Welsh receiving the ball back from his catcher.

The player: Welsh was highly valued as a young pitcher with an unusual side arm delivery, where he would sling the ball to the plate straight armed. Originally drafted by the Yankees, he was a part of a blockbuster trade quite common in those days. Along with Tim Lollar, Ruppert Jones, and Joe Lefebrve he was traded for John Pacella and Jerry Mumphrey. As a rookie, Welsh quickly established himself as a starter. Despite a losing record, he had 4 complete games along with 2 shutouts during his first campaign. He was not as effective in the following years, and after being purchased by the Expos in 1983, he would not see the majors in 1984. After coming back to the majors in '85, his career would end the next season with the Reds. He currently is the color commentator for the Reds TV broadcasts. 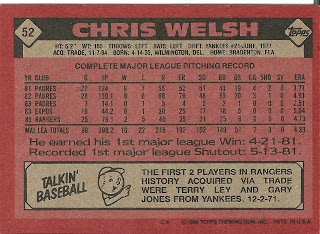 Rear guard: Welsh gave up only 3 hits and no earned runs in 7 innings against the Giants in his first win. Neither of the first 2 players acquired by the Rangers ever played for them. They were flipped immediately to the Indians with pitcher Denny Riddleberger, and outfielder-first baseman Del Unser to the Indians for pitchers Rich Hand and Mike Paul, outfielder Roy Foster, and catcher Ken Suarez. Mike Paul and Rich Hand had really good 1972 seasons, but Roy Foster never played in the majors for the Rangers, and Ken Suarez was a backup catcher with little hitting ability. On the other side of the trade, Del Unser would go on to have a fine career with various teams and the other players barely ever played in the majors again. Advantage: Rangers
Posted by Jets Break Jaws at 12:48 PM