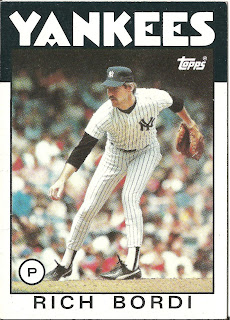 Card thoughts: Bordi was an unusually tall pitcher for his time and this card really shows off his long limbs.

The player: Bordi made his debut in 1980 for the A's the same year he was drafted, but he didn't establish himself as a player until he joined the Cubs. In their division winning year in 1984 he went 5 and 2 with a sparkling 3.41 ERA over 7 starts and 24 relief appearances. This attracted interest from the Yankees who traded youngster Brian Dayett and pitcher Ray Fontenot for Bordi, backup catcher Ron Hassey, young outfielder Henry Cotto, and perpetual AAA pitcher Porfi Altamirano. Bordi would have his best season in 1985, the one shown on this card. He had a 3.21 ERA and walked only 29 in 98 innings. He was also fined by manager Billy Martin (whom he was familiar with from his days with the A's) for not trimming his mustache. Bordi's career went downhill after the 1985 season, as he would bounce from the Orioles, back to the Yankees, and back to his original team the A's before retiring 3 years later at age 29. 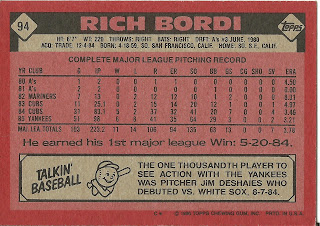 Rear guard: Bordi got the win in a blowout versus the Astros at Wrigley Field. As he was normally a reliever, he pitched only five innings, despite giving up one run and having a six run cushion when he left the game.

Before this "Talkin' Baseball" fact, I always thought of Deshaies as an Astro. It turns out, he was an atrotious Yankee as a young man. Deshaies suffered the loss in that game and had an 11.57 ERA that season over 2 starts.
Posted by Jets Break Jaws at 10:45 PM