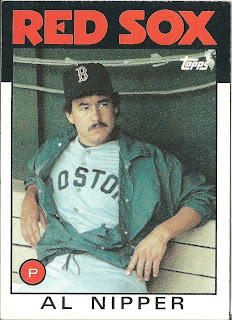 Card thoughts: Yeah, we know you don’t care what a crappy pitcher you are. Don’t rub it in by looking all slovenly at the end of the bench, Nipper.

The player: I hated Al Nipper, but it’s not really his fault. I hate Nipper because Jim Frey, who had to been one of the worst Cub GMs in recent history, traded (an admittedly) disgruntled Lee Smith, one of the top closers in baseball, to get Nipper and Calvin Schiraldi (another HUGE bust) from the Red Sox. And then he had the gall to call Nipper a “big winner”—a man who had never won more than 11 games and had a career ERA well north of 4 by that point. But don’t get me started . . .
(Sigh). Well, Nipper had a decent rookie year in 1984, coming in 7th in the Rookie of the Year voting by winning 11 games. He even got his ERA below 4, at 3.89. But for the subsequent 3 years before his trade to the Cubs, Nipper got worse and worse. Every year, his ERA climbed, and the amount of home runs he gave up increased. From 1985 to 1987, Nipper won 9, 10, and 11 games, but lost 12 each year as well.
He wasn’t even helpful in the 1986 World Series. In his one start, Nipper was decent, giving up only 3 runs in 6 innings; but in a relief appearance in the decisive Game 7, he got pounded, giving up 2 runs in a third of an inning, putting the game and the series out of reach for Red Sox. Most ignobly, reliever Jesse Orosco of the Mets, who rarely batted, got an RBI single off him.
Then came one of the worst trades in Cub history. Nipper actually wasn’t too bad for the Cubs, going 2-4 but with his best ERA since a 3 game cup of coffee with the Red Sox in 1983. But he hurt his elbow, and was released at the end of spring training in 1989. He was quoted as saying that “[The general manager] and [the manager] were underhanded and deceitful,” when they said his knee injury was suffered in the off-season, rather than in spring training (this was a difference between paying a full season salary, or severance pay). Nipper couldn’t get a team to sign him, and he sat out the entire season. The next year, he resurfaced for one last season with the Indians, where he went 2-3 with a 6.75 ERA over 5 starts and 4 relief appearances.
Since retiring, Nipper has worked as a pitching instructor in several systems, and was both the Red Sox (1995-1996) and Royals (2001-2002) pitching coach. He filled in as the Red Sox bullpen coach in 2006. 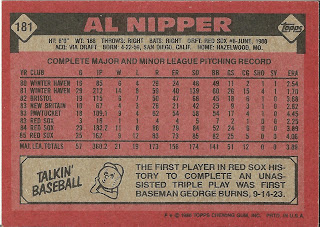 Rear guard: Nicknamed "Tioga George," Burns was a rare right handed hitting first baseman. He once set a record for most double plays turned by a first baseman. He was no slouch at the plate either, winning the MVP in 1926, when he hit a then record 64 doubles. The batter that hit into the triple play was Frank Brower.

This date in baseball history: In 1941, The Brooklyn Dodgers are the first team to require that batters wear a helmet.