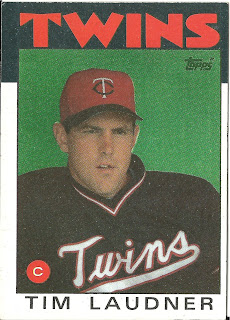 Card thoughts: This has got to be one of the worst pictures in this set. Here are the problems with this card:

1)      Laudner is photographed in a very dark light, almost as if in a close
2)   His right eye is closed in a sinister way
3)     The green background is in terrible contrast to Laudner’s darkened mein: He looks like he’s disappearing
4)     Although this wouldn’t be applicable at the time, I can’t help but imagine Laudner as some grumpy extra in one of those bombastic CGI extravaganza with the green screen not filled in yet.
Lest you think this is an anomaly, his card the next year also shows Laudner against a strange, monochromatic background.

The player: Laudner always could hit for power, but never hit for a high enough average to start full-time.
He had a monster 1981 season at AA Orlando where he hit 42 home runs (and win the league MVP award), and he was called up to the Twins for good the next season, where he would spend his entire 9 year career.
Laudner would show good power and not much else from 1982-1986, hitting 10 home runs as a backup catcher in both 1984 and 1986. But he struggled to hit above .240, so his RBI totals never got above 35.
The Twins finally had enough confidence in Laudner to hand him the majority of starts at catcher in 1987, and he had a good year for the World Champion Twins, hitting 16 home runs and 43 RBIs, despite hitting only .191. After hitting .071 in the ALCS, he hit .318 in the World Series, including a crucial home run and 3 RBIs in the Twins 8-4 Game 2 win over the Cardinals.
Laudner had his best season in 1988, catching 109 games and having career highs in hits (94), doubles (18), RBIs (54), and batting average (.251). For this he was rewarded with his only all star berth. Laudner had a double in the 7th inning in the game off #138 Mark Davis.
Despite the fact that Laudner seemed to have finally put it all together, he lost his starting job and would only play one more season as a backup to Brian Harper, an inferior catcher but superior hitter. He failed to make the team out of spring training in 1989, when Junior Ortiz made the club. After going hitless in AAA, Laudner retired.
For a time, Laudner worked in the heating and air conditioning business, and currently in works as a co-director at his former teammate Dan Gladden’s Big League Baseball Camp. He also broadcasts some select Twins games, and is one of those various ex-jocks who give their insight from time to time on a regional Fox sports broadcast. 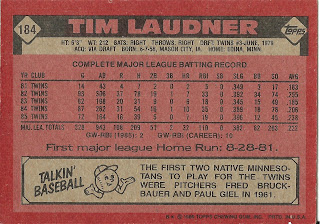 
Wow. Fred Bruckbauer only faced 4 batters in the majors and didn't retire any of them. In a 20-2 loss to the Kansas City A's, future manager Dick Howser doubled; Jay Hankins singled, plating a run; Jerry Lumpe walked; and finally, Lou Klimchock drove them both in with a double. Bruckbauer's career ERA? Infinity!


You know what other pitcher pitched badly in that game? Paul Giel. He gave up 8 runs in a third of an inning. That probably contributed to his 9.78 ERA for the Twins in his final season. In half of Giel's 6 seasons, his ERA was over 8.
Posted by Jets Break Jaws at 10:24 PM

I loved Laudner when I was a kid, but man oh man is he a terrible broadcaster for the Twins.