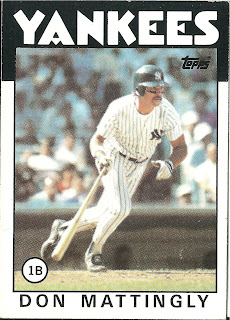 Card thoughts: This was the last card I got to complete the set. And “Donnie Ballgame” was by far my favorite non-Cub growing up.

The player: For a five year stretch, Mattingly was arguably the best all around player in the game. A lefthanded hitter who hit in a severe crouch, he was adept at reaching the short left porch in Yankee stadium. Mattingly hit for power and average, and almost never struck out. But starting in 1990, after a back injury flared up, it prevented him from becoming a possible hall of famer. He spent his entire career with the Yankees, a remains one of the most popular Yankees of all time.
It’s hard to believe, but Mattingly was behind #164 Steve Balboni on the Yankees first base depth chart in the early 80s, despite being a better fielder and hitting well over .300 at each of his minor league stops. But the Yankees grew alarmed at Balboni’s propensity to strikeout and traded him away. This freed up a space for Mattingly.
In his first season with the club, he was a part time first baseman/outfielder and he hit about .283 with 4 home runs. The next season was the first of three straight MVP-type seasons. Mattingly led the league in hits (207), doubles (44), and batting average (.343). He also drove in 110 runs, and slugged .537. Mattingly made the first of 6 straight all-star squads, although he was voted in by the fans only once as a starter.
In the season represented by this card, Mattingly actually won the MVP award, by leading the league in doubles (48) and runs batted in (145). His RBIs were the most by an AL player since the mid-50s, and his 35 home runs was a career high. Mattingly also won the first of 9 gold gloves.
Mattingly’s amazing three year stretch culminated in what was his perhaps his best year, 1986. He led the league in hits (238), doubles (53), slugging percentage (.573) and OPS (.967). Mattingly’s .352 average was a career high.
The next two seasons, Mattingly was a star player, although not a super star. He still hit over .300, drove in a little over 100 runs, and scored about 90, but he wasn’t the top player in the league anymore. A highlight from this period is when he hit a home run in 8 consecutive games, tying a record held by Dale Long (and subsequently tied by Ken Griffey Jr.) in 1987. This was also the season he hit a record 6 grand slams, which curiously were only grand slams in his career. In 1989, Mattingly had his last season with over 100 RBIs, driving in 113.
The next season, his career started to decline. Mattingly had his worst overall season, while struggling to stay in the lineup because of an injured back. He hit a lowly .256 and hit only 5 homers. The subsequent seasons, Mattingly’s stats improved, but he became more of a slap hitter, still getting a good share of doubles and singles, but little power, although he did hit 14 and 17 home runs in 1992 and 1993. He also appeared in seminal Simpsons episode “Homer at the Bat,” where he played a good-natured homemaker, who was kicked off the team by Mr. Burns after refusing the shave his sideburns. Mattingly was actually once benched for having too long of hair by George Steinbrenner, but it was after the episode had already been written. After the 1995 season (and his only playoff appearance where he hit .417), he retired, finishing with over 1,000 runs and runs batted in, over 2,000 hits and a .303 average.
Mattingly remained with the Yankees after retirement as a roving hitting instructor; he eventually was promoted to the big club as their hitting coach for the 2003 season. He was then promoted again to be bench coach under Joe Torre. Mattingly was widely assumed be Torre’s heir apparent in the manager’s seat when he retired, but the job went to Joe Giradi instead. He followed Torre to LA, where he finally took over for Torre as manager last year. 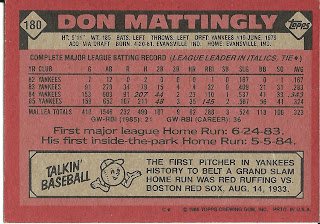 Rear guard: You can see why I was so excited when I got this card in 1986. You would have sworn that Mattingly was going to be one of the greats, with those gaudy numbers.
Mattingly's first home run was off the Red Sox pitcher John Tudor. It was a solo home run.
Red Ruffing is in the hall of fame for his pitching (although he holds the record for most earned runs and runs allowed), but he was known as a good hitter as well. He was sometimes used as a pinch hitter when wasn't pitching. Ruffing had a lifetime .269 batting average, and hit over .300 eight times in a 22 year career. He only had 36 home runs, however.
Posted by Jets Break Jaws at 8:03 PM

One of my fave cards ever. This is such a great blog. Thanks!