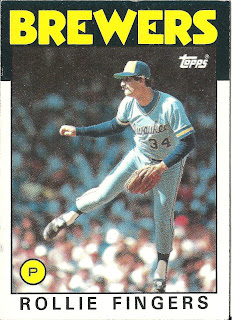 Card thoughts:  This is Rollie Fingers’ last card. Here’s his first.
The player: Rollie Fingers, along with Bruce Sutter, Goose Gossage, and Sparky Lyle, was the pitcher who changed the role of the relief pitcher. Before Rollie, most teams did not have a closer. Sure, many pitchers reached double digits in saves, but that is because they just happened to pitch at the end of a game, not because they are assigned to that role. Closers were also considered to be on “temporary” assignment, a failed starter to be put back in the rotation once they became successful again in relief. Fingers changed this perception: Now, a player could be more valuable, only closing out games, then being made a starter. Fingers relied on control and guile, rather than pure heat or a trick pitch, to get batters out.
Like most relievers of the day, Fingers began in the minors as a starter. But there was no room initially in the starting rotation of the A’s, so he was put into the bullpen. In 1969, Fingers saved 12 games, but the next year the A’s tried him as a starter for 19 games. With a middling 7-9 record, it was back to the pen for the rest of his career.
In 1972, Fingers famous mustache was born. Eccentric owner Charlie Finley challenged everyone on the team to grow facial hair until the end of spring training. The best won $300. Fingers was the winner. Here’s his last card before the mustache.
1972 also started the A’s streak of three straight World Series wins. Fingers had ERAs below 2 in each World Series, winning the series MVP award in 1974 after saving 2 games. He had 21, 22, and 18 saves over those years while pitching in a league high 76 games in 1974. His save totals would have been higher, except the A’s pitchers were so good (Vida Blue, Ken Holtzman, Blue Moon Odom, Catfish Hunter), that they tended to finish what they started.
Fingers only got better as he reached his 30s. He had 2 more good years with Oakland (he led the league in games pitched with 75 in 1975 and had 24 decisions (!) and 20 saves in 1976), but was involved in the infamous “fire sale” that voided by the American League. Finley was a real cheapskate, and attempted to trade a bunch of his star players at the trading deadline to avoid paying their contracts. But when the trades fell through, he tried to sell them for $1 million each, including Fingers, who was sold to the Red Sox. This deal, like the others, was voided.
But it did tell Fingers that if he stayed with the A’s, he would be getting paid. He instead signed with the Padres, where he would lead the league in saves for the first time with 35 in 1977 and 37 in 1978. This was perversely because the Padres were a much worse team than the A’s, and their starters couldn’t go as long.
After an off year in 1979, and a typical strong 1980 campaign (11-9, 23 saves, 2.80 ERA), Fingers was involved in two blockbuster trades at the winter meetings. He was first traded to the Cardinals, with longtime teammate with the A’s and Padres Gene Tenace and Bob Shirley for 7 players, the key being star catcher Terry Kennedy. The Padres also got two middle relievers (John Littlefield and John Urrea); a weak hitting utility infielder (Mike Phillips—only lasted 14 games with the Padres); a backup catcher (Steve Swisher); and some prospects who never panned out.
Fingers would never play a game with the Cardinals. He would be traded to the Brewers four days later, in a trade that worked out very well for the latter team. Fingers went with another star catcher, Ted Simmons, and soon to be star pitcher, Pete Vukovich for four marginal major leaguers, although Lary Sorenson was pretty good for the Brewers in the late 70s.
The next season, Fingers would become the first reliever to win the MVP award (he also won the Cy Young award). His numbers were Eckersley-esque (if that is a word). He went 6-3 in the strike shortened year, with a miniscule 1.04 ERA and led the league with 28 saves. He walked only 13 in 78 innings. He had another good season in the Brewers pennant winning 1982 campaign, but that season also heralded the end of Fingers effectiveness. He was unable to finish the season (and missed the playoffs) due to a torn forearm muscle; the next season, he missed entirely because of a bone spurs in his elbow.
When Fingers returned, he was effective as ever, saving 23 games and sporting a low, 1.96 ERA. The next season, the one shown on this card, was his worst. Only 17 saves and a high 5.04 ERA scared the Brewers away from re-signing him. The only other team that showed interest was the Reds, but the owner banned facial hair on the team, and Fingers would not sign there.
When Fingers retired, he was the all time saves leader with 341; he has since been passed by 9 other pitchers. He was elected into the Hall of Fame in 1992, only the second reliever at the time to be so honored (the other being Hoyt Wilhelm). Here’s a bio clip of Fingers.
A published author, Fingers has written 2 “digest” type of baseball books after his career ended. He has also appeared in an annoying Pepsi Max ad I must have seen 1,000 times last year while watching baseball. I will not torture you with a link. 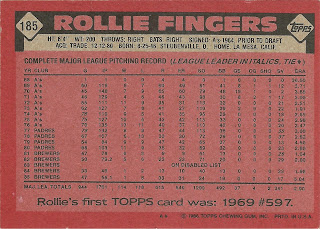 Rear guard: Fingers' rookie card, which was linked to earlier, was a multi-player rookie card designated "American League Rookie Stars." Of the other players, Bob Floyd played for 7 years with the Orioles and Royals and only hit .219; and Larry Burchart didn't win a game in his only major league season, in 1969. I don't why these players, other than Fingers, were considered future stars. Burchart's only good season in the minors was in Rookie ball, and Floyd was a marginal .240 hitter with no power.


This date in baseball history: In a deal that has relevance to Fingers' career, Charlie Finley sells pitcher Paul Lindblad to the A's in 1977. Unlike the other fire sale deals, this one was not voided by the commissioner.
Posted by Jets Break Jaws at 10:14 PM

Do you drink Coke or Pepsi?
ANSWER THE POLL and you could win a prepaid VISA gift card!