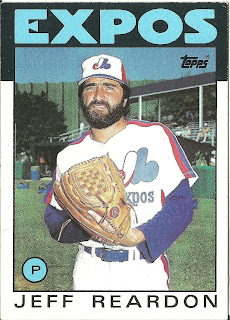 Card thoughts: Another glow-in-the-dark Expo, with Reardon twisting his body strangely. And I really don't like the look of that green, corrugated "Berlin Wall" out there in the outfield. Just a spooky card.

The player: Reardon was just coming into his own as one of the major league's best closers when this picture wasa taken. The Expos stole him in a trade from the Mets for a washed up Ellis Valentine. He would lead the league in saves with 41 for the year shown on this card, and then save over 30 games 6 more times. Like a lot of top relievers, Reardon never stayed  long in one place. After the Expos he would pitch for the Twins, leading them to their 1987 World Series. Here he is finishing the final game of ALCS leading up to the World Series. He saved one game in the series and didn't give up a run in the Twins series victory. He would later pitch for the Mets, Red Sox, Braves, Yankees, and Reds and became the all-time saves leader in 1992 while with the Red Sox with 341 saves, breaking Rollie Fingers' record. Reardon's record would be short lived as well: Lee Smith broke it 1993. He still ranks as the 7th all-time saves leader with 367. He was also a 4-time all-star--although he never appeared in a game.

After his baseball career, Reardon struggled with depression which began to severely effect him after his middle child overdosed in 2004. Overly medicated, Reardon bizarrely held up a jewelry store. An account of this incident is here. He was found not guilty by reason of insanity. 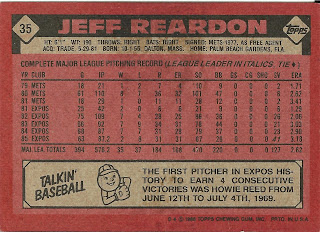 Rear guard: Howie Reed would only win 6 games that season. In fact, he never won more than 7 games in any season. 1969 was the Expos first season.
Posted by Jets Break Jaws at 8:38 PM

so is this blog dedicated to no comments being returned by the author?

I like to let you guys discuss among yourselves. I had my say!