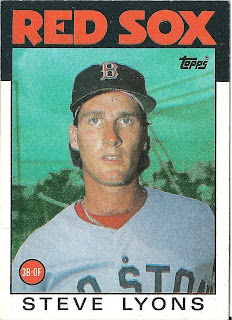 Card thoughts: I feel ashamed that I used to rely on Topps for the positions of players. For crying out loud, Lyons was a starting outfielder for this team, and barely played any third. Yet this, his rookie card, has the positions reversed.

The blurriness of this card (due to improper printing) is appropriate to this player, as is the wide-eyed, Jeff Spicoli look.

The player: Steve Lyons was known as “Psycho” because of his bizarre behavior as a player. He would often play tic-tac-toe with his spikes while playing the infield. In a memorable instance, Lyons absent-mindedly dropped his pants during a game to shake out the dirt. Unfortunately, as a color commentator, some of his off the wall comments got him in hot water.

But Lyons’ odd behavior wouldn’t have been known if he hadn’t been a fairly decent utility player in his career. He played every position, including pitcher, in nine-year span, with most of his action coming at centerfield and third base.

As a rookie, Lyons was the Red Sox starting centerfielder, and he put up decent numbers, hitting .264 and stealing 12 bases. The next season, he was supplanted by veteran Tony Armas who had considerably more pop than Lyons. The latter was traded to the team he would be most remembered for, the Chicago White Sox, in the middle of the season as a result. The other Sox used him all over the field, but he managed to play enough games at third (1988) and second (1989) to be considered the starter at those positions. Lyons best season came in that 1988 campaign, when he played in a career high 146 games, drove in 45 runs, and managed a .686 OPS.

Seemingly better when he played more regularly, Lyons average dipped to .191 in 1990 when he managed to get only 146 at bats. Signing with the Red Sox in 1991, he did a bit better in the subsequent season, hitting .241, but that would be the last year he would come to the plate more than 100 times. In 1992, he played with the three different teams (the Braves, the Expos, and once again, the Red Sox at the end of the year, the third non-consecutive year he played with them.) and only hit .200 in 55 at bats. After a 28 game swan song with the Red Sox in ’93, he was finished.

It seemed Lyons would be a natural as a baseball broadcaster, and he was at first, landing a coveted gig with FOX in 1996 in addition to working for the Dodgers. But a series of racist comments against Jews, Japanese, Italians, and Hispanics over the years eventually got him canned (I guess making fun of a blind guy at a Mets game wasn’t enough). The final straw came when he accused on-air broadcast partner Lou Pinella of “stealing his wallet” and “hablaing Espanol” during an ALCS broadcast. Lyons was fired from his on-air gig, but was still retained by the Dodgers as a road game commenter. 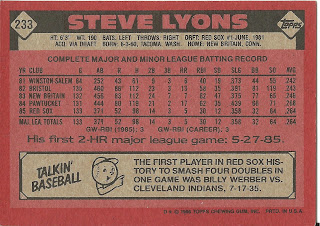 
Wow. Billy Werber only died a few years ago at the age of 100! At the time of his death, he was the oldest living former baseball player and the last to have been teammates with Babe Ruth.