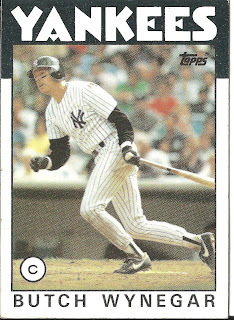 Card thoughts: "Butch" is the nickname they always gave the tough kids in young boys' stories. Or "Spike." We'll see a Spike later in the set.

The player: Wynegar was one of the best young catchers in the 1970s, coming in second in the Rookie of the Year voting at the age of 20. But his trade to the Yankees in 1982 spiraled his career and mental health downward and he was never the same player again.

Wynegar never played above A-ball before debuted with the Twins April 9, 1976. But that didn’t seem to matter, as he hit 10 homers, drove in 69, and walked more than he struck out, as a rookie. Wynegar was no slouch behind the plate either, as he rated just behind Jim Sundberg as the best defensive catcher in the American League. He also was the youngest player at the time to appear in an all star game where he drew a walk in his only at bat. Topps gave him a rookie cup card for his efforts.

Wynegar’s sophomore campaign was even better, as he made his second straight all star team and upped his RBI total to 79, and improved his stellar defense even more by catching 60 base runners stealing, leading the league. He slumped to a .229 average in 1978, but came back with consistent seasons in 1979 and 1980 where he drove in 57 runs each year and kept his average above .250.

Despite signing a lucrative free agent contract with the Twins before the 1981 season, he was traded to the Yankees in the middle of the 1982 season because his poor .209 average (#122 Pete Filson was one of the players he was exchanged for). At first, Wynegar thrived under the good natured tutelage of Yogi Berra and several other “right hand men-managers” to tyrant-tycoon George Steinbrenner, hitting .293 the rest of the way that season. But he hated New York City, so much so that he only went to Manhattan twice in all of his years playing for the Yankees.

Wynegar was platooned with Rick Cerone initially, but once again became the everyday catcher in 1984 and he hit .267. But with arrival of Billy Martin as manager in 1985, his career and mental stability took a turn for the worse. His .223 average that season was the lowest in his career, and he lost playing time to #157 Ron Hassey. The shy and sensitive Wynegar hated Martin’s brash, macho attitude. He was relieved when Lou Pinella replaced him the next season, but he found the latter was just as bad as the former. Hitting .206 in mid July, Wynegar eventually lost all will to play the game, and quit the team in before a game in Cleveland in the midst of three year contract. There’s a fascinating article in the Reading Eagle (part 1 and part 2) with more detail of what led up to this incident.

Placed on the restricted list, Wynegar didn’t know if he wanted to play baseball again. But the Yankees were able to off-load him to the Angels after the season, where played sparingly behind iron man catcher #62 Bob Boone for two years before calling it quits in 1988.

Wynegar has both managed and acted as a coach in the minors since his retirement. He is the hitting coach for the Yankees AAA squad. 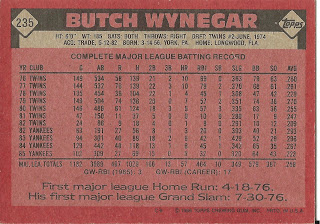 
This date in baseball history: In 1962, two Red Sox players, Gene Conley and Pumpsie Green, in a scene straight out of a prison break movie go missing from the Red Sox team bus. They asked to use the bathroom while the bus was stuck in traffic and then disappeared.  They were missing for three days, and then were spotted trying to board a plane is Israel without passports or luggage.
Posted by Jets Break Jaws at 8:36 PM