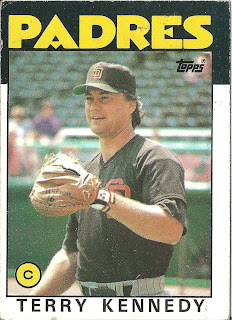 Card thoughts: Looks like a couple of front office types or scouts are checking out Kennedy warming up before a game.

The player: While with the Cardinals, Kennedy was a backup catcher with little power. But once he was traded to the Padres, he learned to pull the ball and, for a brief time, was second to #170 Gary Carter in terms of offensive catchers. A slow footed man, Kennedy always had a hard time throwing out base runners, despite a strong, accurate arm.

Kennedy was a first round draft pick for the Cardinals. But with Ted Simmons fully entrenched behind the plate, Kennedy had a hard time breaking into the lineup, After a massive, multi-player trade in 1981, Kennedy finally got his chance with the Padres in 1981, where he hit .301 and made the all star team. He made a massive leap forward offensively the following two years, as he drove in over 90 runs each year. He also tied Johnny Bench’s NL record for catchers with 40 doubles in 1982.

Although still effective, Kennedy’s bat began to slow by 1984. He would never reach his peak production levels again, and it turned out he would not be offensively gifted as Carter as many had forseen. Kennedy would continue to be decent RBI guy for the Padres, and would make the all star team again as reserve the season represented by this card.

After a 12-57-.264 season for the Padres in 1986, Kennedy was sent to the Orioles for pitcher Storm Davis. In his first season with the Orioles, Kennedy made the all star team for the last time by hitting 18 home runs (the most he had hit since 1982) and driving in 62. In 1988, he battled injuries and was ineffective when healthy. His 79 games were the least Kennedy had caught since 1980, and he lost the starting job to Mickey Tettleton.

Kennedy was traded again, this time to the Giants, after the ’88 season. He was starting catcher on the 1989 pennant winners, but by this point his power had deserted him and he drove in only 34 runs. In the playoffs that year, he hit below .200.

Two more seasons with the Giants of increasingly less effective play led to his retirement after the 1991 season. In his final game, he pinch hit for Rod Beck and weakly grounded into a double play. 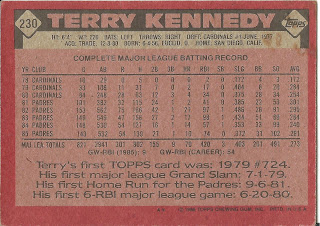 Rear guard: I think I spilled pop on this card.

Here's Kennedy's first card. For some reason, in 1979, the Topps multi-player rookie cards are in black and white. Of the other players he shares a card with, George Frazier has a card in this set so I'll discuss him later; and Tom Bruno had actually already been up with both the Royals and Blue Jays before this card was issued. Curiously, Bruno appears solo on an O-Pee-Chee card the year before. 1978 was by far the most productive of his career, as he had a 1.99 ERA in 49+ innings.

This date in baseball history: In what was once the longest baseball game (time-wise) in major league history, the Mets defeated the Braves 16-13 in 19 innings (at 4 AM) in 1985. The Braves unwisely set off fireworks at that early hour, waking up and freaking out nearby residents.
Posted by Jets Break Jaws at 6:12 PM