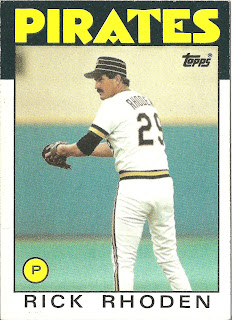 Card thoughts: For some reason, I always think of Rhoden as a Yankee, although he didn’t spend much time there.

The player: While Rhoden was a pretty good pitcher (151-125 career record), he is probably best known as one of the best hitting pitchers of his era. He finished his career with a .238 average (good for a pitcher), 9 home runs, and 75 runs batted in. Rhoden also overcame a childhood disease that left one leg shorter than the other.

Rhoden was yet another product of the fecund Dodger farm system in the 1970s. Featuring a blazing fastball, but mediocre secondary pitches, he made his debut with the Dodgers pitching 2/3 of an inning in relief of Al Downing in 1974. He didn’t really make a mark until 1976 where he went 12-3 with a 2.98 Era, making his first all-star team. The next season, he had a career high in wins at 16, but despite this was relegated to relief duties in the playoffs where he pitched well.

Rhoden pitched only one more year with the Dodgers. He was disgruntled about being moved to the bullpen for the 1978 season and, as were the rules of the time, since he had played for five years could demand a trade or get free agency at the end of the next season. Rhoden was traded to the Pirates at the beginning of the 1979 season for Jerry Reuss, in a deal that worked out well for both teams in the end, but was a disappointment to the Pirates initially. Battling an inflamed rotator cuff, he only pitched one game that season and missed the World Series. It took until 1982 until Rhoden was able to win over 10 games again. By then, it was believed that he scuffed the ball or used a spitball, due to his over-reliance on the fastball.

Although he usually hovered around the .500 mark, Rhoden would win at least 10 games for the Pirates until they traded him to the Yankees in 1986. His best season may have been in 1984, when he went 14-9 with a career low 2.72 ERA. After leading the league in earned runs allowed (105) the season shown by this card, Rhoden managed to bounce back with another fine season in 1986, winning 15 and sporting a sub-3.00 ERA once again.

This piqued the interest of the Yankees, who at the time were stockpiling veteran talent in as desperate attempt to get back into the post season. While Rhoden won 16 games for the Yankees in 1987, and 12 the next year, his ERA kept climbing, and he was getting old. In addition, Rhoden was injured for significant portions of both seasons with shoulder and back issues. In one interesting instance, in a game in 1988, Rhoden was the designated hitter, the first time the pitcher had filled the role since the adoption of the rule in 1973. He went 0-1.

The Yankees, after signing Andy Hawkins and Dave La Point in the 1988-89 off season, decided they could do without the expensive Rhoden and traded him to the Astros for three minor leaguers. Once again, he battled injuries to his shoulder, and he only managed to start 17 games. Unable to find any takers for his services after the season, he retired.

In his retirement, Rhoden has embarked on a second career as a pro golfer. He’s especially deadly on the celebrity circuit. 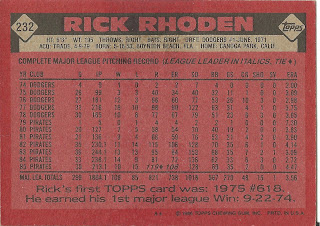 Rear guard: Rhoden's first win was against the Padres in relief once again of Al Downing. He pitched 6 innings and struck out 6 while giving up only one run.


Rhoden shared a rookie card with three pitchers who were still pitching effectively when the 1986 set was issued. Not too bad. The fourth, Tom Johnson, won 16 games in 1977 before injuries ended his career.


This date in baseball history: Brian Downing's record errorless streak in the outfield ends in 1983 after he makes an error on a #160 Chet Lemon.
Posted by Jets Break Jaws at 9:52 AM

Funny, I always think of him as a Dodger.

Was greatly distressed when he was traded. But Reuss helped me laugh away the pain.