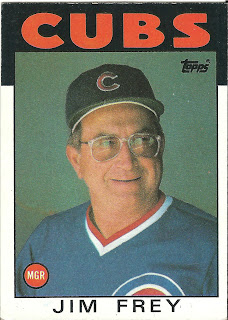 Card thoughts: Because this picture is taken in the dark with a green background, it's making the blues look all messed up.

The player/manager: With Frey, there is no major league career to speak of. After toiling in the minors for the Cardinals, Dodgers, Prates and Braves systems. Frey never got a shot at the majors until he was hired by the famed Earl Weaver to be on his coaching staff in the 70s.

Frey was a manager who always performed spectacularly for a team when first hired (both the Royals and Cubs went to the playoffs in his first year of managing them) before their records tailed off. After coaxing 97 wins out of the Royals in 1980, Frey’s 1981 edition fell flat on his face, and he was fired before the end of the season in favor of #199 Dick Howser. After two years of exile as a coach for the lowly Mets, Frey replaced the mercurial Lee Elia as the Cubs manager. He led the team to the post season for the first time in nearly 40 years and was named Manager of the Year. But he mishandled the pitching staff in the playoffs, and the Cubs didn’t make it to the World Series, despite being up 2-0 in a five game series.

Injuries bedeviled the Cubs in 1985 when their entire rotation went down at once due to injury (either it was a freakish coincidence or Frey was also mishandling his pitchers during the previous regular season as well). Frey was finally fired by the Cubs during the 1987 season, replaced by non-entity Jim Essian.

Frey spent one year as a color commentator for the Cubs on the radio, and them moved into the front offices as GM, replacing the man who had hired him, Dallas Green. There, he made a bunch of terrible deals. A terrifically poor evaluator of talent, he traded Keith Moreland for a washed up Goose Gossage; believed that Lee Smith was going downhill (he saved about 200 more games after the trade) and got back busts #181 Al Nipper and #210 Calvin Schiraldi; signed Dave Smith, Danny Jackson, and George Bell to lucrative free agent contracts long after they were in their primes; and even in the good trade he made (Rafael Palmeiro and Jamie Moyer for Mitch Williams), he ended up choosing two future stars to send, rather than some non-entities.

Frey left the GM spot in 1991 and currently is the vice chairman of an independent league team. 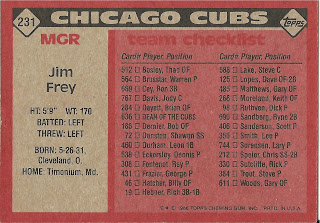 Rear guard: There's no real glaring omissions on the position player side. However, one of these three pitchers should have been issued a card: Jay Baller, Steve Engel, or Ron Meridith. Meridith got a Donruss and Fleer card.


This date in baseball history: The Senators steal 8 bases off of the Indians in the first inning of a game in 1915, establishing a record.
Posted by Jets Break Jaws at 9:17 PM