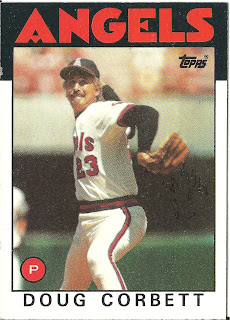 Card thoughts: This would be the last Topps card featuring Corbett with a mustache. He went clean shaven on his 1987 card, and he wasn’t issued one in 1988. All of his cards up until this one showed him with a ‘stache.

The player: Corbett was a sidearm pitcher with a great sinker. The sinker was only consistently effective, however, when he was with the Twins. Once he reached the Angels (a better team), many questioned whether the added pressure got to him. His sinker started to hang, and he started to get creamed.

Before he could make it to the majors, Corbett was with two other organizations, first the Royals and then the Reds. The Twins drafted him in the Rule V draft in 1979. In his first two years, Corbett was one of the best closers in baseball. His rookie season (at the fairly advanced age of 27) in 1980 saw Corbett save 23 games with a 1.93 ERA. He came in third in rookie of the year voting. The next year, Corbett was an all star, and he led the league with 54 appearances. He saved 17 games for a terrible Twins team and featured another fine ERA of 2.57.

Corbett was off to a poor start with the Twins in 1982, but still the Angels coveted him. The Angels liked him so much, they traded minor league slugger Tom Brunansky (who would be a force in the middle of the Twins lineup for years to come) to get him. At the time of the trade, Corbett stated that it was “like going from the outhouse to the penthouse.” Unfortunately, for the first two years with the Halos, Corbett was either terrible (8 saves in 1982 but an awful 5.05 ERA) or mostly pitching in AAA (1983). In 1984, however, Corbett made a comeback of sorts, staying healthy and reducing his ERA to 2.12.

But it was back to his ineffective ways for this season, as his ERA ballooned to 4.89. Corbett had his last good season as a member of the AL West winning 1986 Angels team. Filling in for the injured Donnie Moore mid-season, he saved 10 games, the most since 1983. He won Game 4 of the ALCS by pitching 3 2/3 innings of scoreless relief, but he was scored upon in his other two appearances, giving up a run in a third of an inning in Game 2, and 3 runs in 2 2/3 of inning in Game 6.

Corbett signed a one-year contact with the Orioles after the season, but the team released him in August after he posted a 7.83 ERA over 23 innings.

In retirement, Corbett coached for a time at his alma mater, the University of Florida. 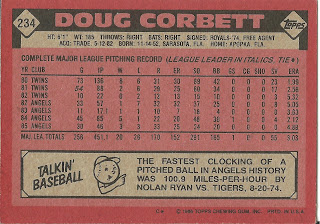 Rear guard: No surprise that Nolan Ryan threw the fastest ball in Angels history. I wonder if this "Talkin' Baseball" fact will appear for other teams?

This date in baseball history: This is the day of the "Pine Tar Incident", when a George Brett home run to win a game against the Yankees was disallowed due to too much pine tar on his bat in 1983.