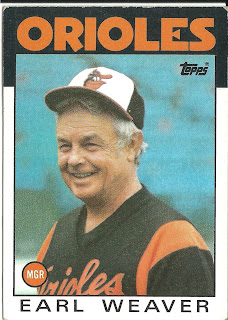 Card thoughts: Weaver’s looking pretty old and grizzled in this picture. In fact, although he would only manage one more year, Weaver only just died this past year. Baseball will age you.

The player/manager: Two Hall of Famers in a row! Legendarily irascible, Weaver was thrown out of games almost 100 times (here’s a legendary tirade, where Earl was incredibly profane (but so was the ump)). It must have worked, as he finished his managerial career (all with the Orioles) with a .583 winning percentage. Weaver won three pennants and one World Series with the team.

A good fielding second baseman, Weaver never reached the majors because of his hitting. He must have seen the writing on the wall early, because he started managing at age 25 in the Sally League (Dick Bartel had to finish out the season after Weaver got called up to AA New Orleans). After sporting a winning record at every minor league stop, he was tapped to manage the Orioles in 1967, taking over for Hank Bauer in July. He would then spend the 15 straight seasons (and 17 overall) piloting the Orioles. The only year one of teams would finish under .500 was the last year he managed, 1986. Quite a remarkable run for a franchise not known today as a consistent winner.

Weaver’s managerial philosophy was centered on pitching (his Orioles always had an extremely strong pitching rotation), defense (Mark Belanger spent years as the starting shortstop, despite never hitting well), and the three-run home run. He was not down with stolen bases, sacrifice bunts, or other inside baseball maneuvers. This philosophy became perfectly suited to the designated hitter era, which started halfway through Weaver’s managerial career.

On offense, Weaver was a believer in “playing the matchups,” and was one of the first managers to use splits to determine where in the lineup a batter should bat (if he played at all) against a particular pitcher. Consequently, in the late 70s and early 80s, Weaver employed a variety of successful platoons, most famously in left field. In another innovation, Weaver used a radar gun in spring training in 1975, the first manager to do so.

An icon in Baltimore, he co-hosted a radio show called “Managers Corner.” Occasionally, he and co-host Tom Marr would do prank broadcasts for their own amusement (Warning: This is incredibly profane and offensive).

Weaver retired after a 1982 season where the Brewers defeated the Orioles 11-2 on the last day of the season to claim the AL East title. His replacement, Joe Altobelli, led the Orioles to their last World Series to date in 1983. Coaxed out of retirement the year shown by this card after Altobelli had started the season 29 and 26, Weaver’s magic was once again apparent, as he guided the Orioles to yet another above .500 record. But Weaver’s heart wasn’t in it, and he left for good after the 1986 season.

Elected to the Hall of Fame in 1996, he died “at sea” earlier this year while on an Orioles nostalgia cruise. 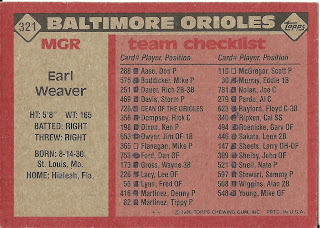 Rear guard: I obviously got this card late in collecting the set. A player who should have gotten a card: Third baseman Fritzie Connally (who had 135 at bats, way more than Dan Ford who was issued a card). Connally never played in the majors after this season, and he never received a base card: Fleer issued a card of him in its update set of 1985.
Posted by Jets Break Jaws at 10:06 PM