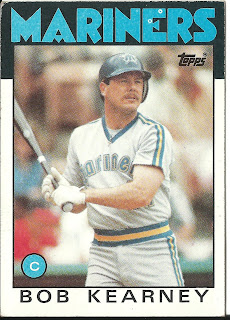 Card fact: In 1983, Bob Kearney was a Topps all-star rookie, but he got no cup for it. This is his third Topps card.

Card thoughts: He really looks like my Uncle Tom. Come to think of it, he looks a little like a grown up Kearney from the Simpsons. This in-game shot has the mustachioed catcher looking down at the third base coach, probably hoping to get some hitting tips.

The player: Great fielder, bad hitter. Kearney arrived in Seattle, courtesy of a trade with the A's for then hot prospect Darrell Akerfelds and well traveled reliever Bill Caudill. He showed promise as a rookie, batting .255. But he really came into his own on defense in the following couple of years, leading in putouts and fielding percentage in 1984 and 85, respectively. 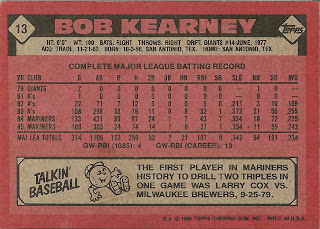 Rear guard: Interestingly, Larry Cox preceded Bob Kearney as the Mariners starting catcher by a couple of years. If you remember the Kingdome, you'll remember how cavernous that place was (hence conducive to triples by slow-footed catchers!)
Posted by Jets Break Jaws at 10:45 PM