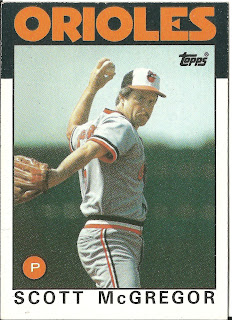 Card thoughts: Always an awkward angle for a shot of the pitcher. Given the expression on McGregor's face, he looks like he's going to whip a ball in your face.

The player: Hard to believe, but until 1983 the Orioles were one of the most dominant teams in the American League, due in large part to their pitching. McGregor was a big part of that. From 1978 until 1985, he won at last 13 games a year. Highlights included a 20-8 record in 1980 and an 18-7 record in the Orioles World Series winning year of 1983. He was especially tough in the postseason, with a career ERA of 1.63 over 4 series. McGregor did this despite having a fastball that rarely topped 84 mph. The secret to his success was pinpoint control, an excellent change up, and incredible pitching intelligence. He would be comparable in pitching style to Tom Glavine, except that he did not have the endurance of Glavine. In fact, the year represented by this card would be the last that McGregor would pitch where he had better than a .500 record.

At age 32, his control began to desert him, leaving him exposed to the long ball. After campaigns where he sported a 6.64 (1987) and 8.83 ERA (1988), McGregor retired, playing all of his 13 seasons with the Orioles. He became a Pentacostal minister after retirement, before returning to baseball in 2002 to be a minor league pitching coach in the Orioles system. 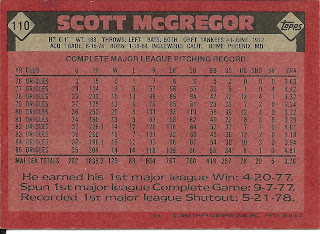 Rear guard: McGregor's first win was against to Indians. He pitched 7 1/3 innings giving up only 2 runs on 7 hits. He struck out 3.

Despite having a reputation for being less than durable, McGregor completed a quarter of all his starts and had 23 career shutouts. His first shutout was also against the Indians, in the first game of a doubleheader. He beat Rick Wait, who also pitched a complete game, by the score of 3-0.
Posted by Jets Break Jaws at 9:11 PM