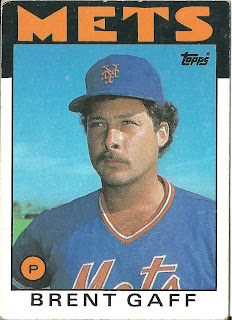 Card fact: This would be Brent Gaff's last card. And he didn't even play this year! I wonder why Topps gave him a card, seeing as he was on the DL all year and he wasn't a star player who's absence would have been noticed. There must have been a Met who actually played this year that deserved a card, but got bumped by no-show Gaff.

Card thoughts: I really like the colors on this card. The blue spring training uniform really gels with the baby blue cloudless sky and the blurry green wall in the background.

The player:  Brent Gaff was one of your generic middle relievers. A pretty good starter in the minors, he had a decent 3.63 ERA as reliever in 1984. Unfortunately, in 1985 he blew out his rotator cuff and never pitched in the majors again. After one game with the Mets AAA club and a comeback attempt with the Milwaukee Brewers, he was through. Rear guard: Gaff's major league debut was a 7 2/3 inning start against the Giants, where he gave up 3 runs (none earned) struck out 6 and walked only 3.

Rod Kanehl was a utility player for the first year expansion Mets. His grand slam drove in shortstop Elio Chacon, centerfielder Joe Christopher, and leftfielder Jim Hickman and was against the Cardinals.