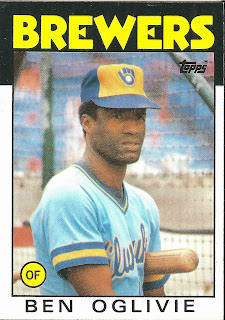 The player: Born in Panama, but raised in the Bronx, it took quite a long time for Ben Ogilve to establish himself as a legit everyday player.  He found it hard to break into the Red Sox outfield in the early 70s, as the Red Sox were solid there with Carl Yastrzemski, Reggie Smith, and Tommy Harper out there.  Part of the reason was his defense. Although he had a good arm, Ogilve had a tendency to over run the ball, which led to batters taking an extra base on him. He also had not filled out yet. Gangly and a little clumsy, Ogilve was derisively nicknamed “Spiderman” by the club.

Ogilve got more chances when he was traded to the Tigers for infielder Dick McAuliffe in 1973. Appearing in over 100 games for the first time as a platoon partner with Dan Meyer, he did exhibit the power he would in later years, but hit a respectable .286. The power began to show up in 1976, when he hit 15 home runs (while playing more often as a designated hitter) and 21 as the regular right fielder the following year. But despite his success with the Tigers, like the Red Sox they never really believed in his talent. Once again, a derisive nickname was attached to Ogilve: the “Banana Man” (because he ate a lot of bananas, but note the racist overtones).

Ogilve tried to not let the lack of faith get to him. Teammates seemed to think that he was a bit of a dunce, who lacked passion for the game. But he was a mellow fellow, who was into philosophy—reportedly, Rousseau, Plato, and Thoreau were among his favorites.

It was after the age of 30 when Ogilve really began to shine. With the Brewers, Ogilve was inserted more regularly into the lineup, usually in the fifth spot. He got his big break when incumbent right fielder Larry Hisle tore a rotator cuff early in 1978. By necessity, Ogilve became an everyday player.  In 1979, he drove in 81 runs while slugging .525. In 1980, he was even better, tying for the league lead in home runs with 41 while driving in 118. His league lead in intentional walks with 19 showed how much opposing pitchers respected Ogilve. And fans noticed as well. Ogilve was voted into the all-star game as the starting left fielder, over players like Rickey Henderson and Jim Rice. In the game, he went 0 for 2 with 1 walk.

Ogilve was a huge reason why the 1982 Brewers were nicknamed “Harvey’s Wallbangers.” Although his average dipped to .244, he slugged 34 homes and drove in 102 runs, while once again making the all-star squad as a reserve. In Game 5 of the ALCS, he hit an important home run off of Bruce Kison, for only his second hit of the series. He once again hit a solo home run in a deciding game, this time Game 7 of the World Series, but it was in a losing cause.

Ogilve would remain with the Brewers until 1986, a veteran presence who still commanded respect for his power, despite its decline over the years. He spent 1987 and 1988 with in the Japanese League, where he hit for both power and average. Since retirement, he’s been a hitting coach with various minor league clubs, most recently with the West Michigan Whitecaps (Class A). 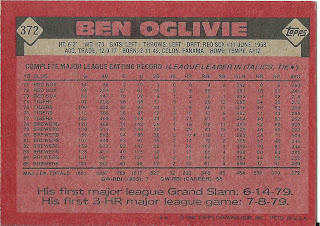 Rear guard: Ogilve's first three homer game came against the Tigers. His home runs drove in four of the Brewers five runs in that game.
Posted by Jets Break Jaws at 9:46 PM

I was only just recently able to acquire Oglivie's 1972 Topps rookie card (#761), which seems to be going for much more than what's being listed in Beckett.