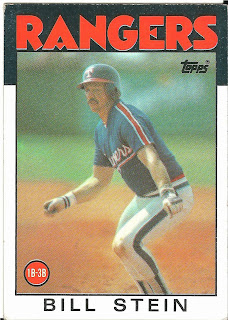 Card thoughts: Stein is doing the ever popular “basepath” surf. This would be his last card.

The player: Stein was pretty much a professional utility man upon his arrival in the majors in 1972. His only years as a regular came after the Mariners drafted him in the 1976 Expansion Draft.

Stein was originally signed by the nearby Cardinals out of Southern Illinois University, which was at that time a bit of a baseball powerhouse. As a college draftee, he was assigned to AAA Tulsa originally, and hit well there. But he was a man without a position. Although he could adequately play all the infield and outfield positions, he didn’t defend at any of them particularly well. This meant he was mostly stuck at AA and AAA until 1975, despite averaging a .295 average.

After a trade to the White Sox (via the Angels), Stein had his best season AAA, leading the league in hits, and hitting for power (.505 slugging percentage) for the first time. This earned him a permanent roster spot in 1975, and he even got a chance to play regularly at third (his best position) for a time when incumbent Bill Melton stopped hitting. But for the Sox his real value was a utility man, and he played all the infield positions and right field during the season.

Left exposed after the ’76 season, Stein was drafted by the Mariners, and he would turn in his finest major league season in 1977 as their regular third baseman, hitting 13 home runs and driving in 67. Twice during the season, he hit two homers in a game. Even his defense improved: His 146 putouts were tops among third basemen.

Unfortunately, this convinced the Mariners they had a solid third baseman for the next few years. They signed Stein to a three-year contract in 1978, but he would never approach those 1977 numbers again. A bruised hand sapped some of Stein’s power and defense, and he would lead third basemen in errors with 25, despite playing in only 111 games at the position (an abysmal .929 fielding percentage). The following year, he was injured much of the season, and his starting role was taken by Dan Meyer. So Stein went back to his old role as utility player.

While Stein still could hit, his lack of defense limited his utility. After a trade to the Rangers in 1981, he began to spend more time as a designated hitter and pinch hitter. Almost immediately he made his presence known, recording a record 7 pinch hits in row. For the year, Stein would hit a career high .330.

Stein would continue to excel off the bench, swatting .363 as a pinch hitter in 1982, driving in 7 runs that year, and the next. He was aging fast, however, and he only played in 27 games in 1984 as he nursed a wrist injury. The Rangers attempted to trade him after the season, but a physical showed a back problem, which invalidated a trade to the Pirates. Most believed that this spelled the end of Stein’s career, but with judicial use by manager Bobby Valentine, he managed to hit over .400 in a pinch hitting role.

The Rangers elected not to re-sign Stein after the season, and he retired. After retirement, he coached high school baseball for a season, and later spent time managing in the Mets and Giants systems. His career pinch hitting average was .282, with 2 home runs and 28 runs batted in. 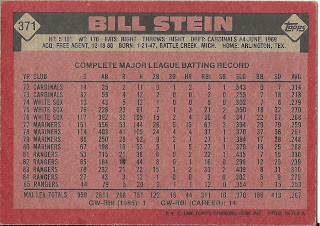 Rear guard: In BIll Stein's final game, played this season, he struck out as a pinch hitter for Steve Buechele.
Posted by Jets Break Jaws at 8:36 PM