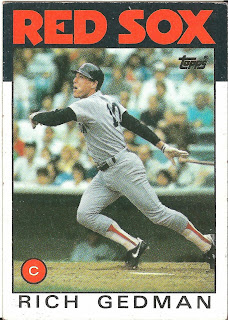 Card thoughts: You seldom see an action shot like this in this set: Gedman’s body is tensed; his eyes drift skyward, as he obviously thinks he got all of a ball. Gedman was in the middle of three straight seasons when he was one of the top catchers in baseball.

The player: Gedman, a local boy from Worcester, MA was not drafted out of high school. Signing as an undrafted free agent, his learning of the catching position greatly enhanced his value to the Red Sox.

Despite Gedman’s undrafted status (a newness to the catching position), he was both a great receiver and hitter in the minors. Unfortunately, when Gedman was signed, long time star catcher #290 Carlton Fisk blocked his progress to the majors. But by 1981, Fisk had signed with the White Sox, opening up the position. As a rookie that season, he shared time with Gary Allenson, whom he easily outperformed in the strike shortened season (he had a “triple slash” line of .288/.317/.434). Gedman came in second in Rookie in the Year voting that season.

A sophomore slump in 1982 (.249 batting average), was followed by a much better season in 1983, partly because of the hiring of Walt Hrniak as a hitting coach, considered one of the better coaches in that era. Gedman would have his best season in 1984, where he finally began hitting for power, blasting 24 home runs and driving 79, in the first of three all-star caliber seasons in a row. Even his catching improved, as he threw out 41% of base stealers that season.

Including 1984, Gedman would lead the league in caught stealing for three straight seasons, and he continued his good hitting in 1985, with a career high 80 RBIs, earning first of two straight all-star appearances. Although his hitting was about as good in 1986 (and he threw out 50% of all base runners), Gedman led the league in passed balls with 14, which might be attributable to overwork (he had caught over 130 games the past two seasons). This would come into play in the World Series that season, as it was commonly believed that the Bob Stanley “wild pitch” that allowed the Mets to tie Game 6, was really a Gedman passed ball.

In a freak accident after the season, Gedman was struck by a warm up toss on a barnstorming tour of Japan, fracturing his cheek bone. This limited his playing time to 52 games in 1987. Even worse, along with 9 other players, Gedman remained unsigned as a free agent after January 8 in that off season, which meant that if he was not offered a contract by another team, he couldn’t re-sign with the Red Sox until after May 1. The owners colluded against many of these players, which led to Gedman not getting an offer from another team, which forced him to sit out the first month of the season, before re-signing with the Red Sox.

Gedman ended up hitting .231 that season, but that would be the highest he would hit in his last five years in the majors. Poor hitting led to his relegation to the bench after the Red Sox signed Rick Cerone before the 1989 season; the arrival of Tony Pena the next year made his presence on the club superfluous, and he was traded early that season to the Astros as a part of a “conditional” deal, whatever that means.

With the Astros, he would hit .202; but as a backup with the Cardinals in 1991, he would hit an incredibly low .106!  Gedman’s offense was so poor that season, he had a negative OPS+, and he got only 10 hits all season (but 40% of them for extra bases—3 home runs and 1 double). He raised his offensive production considerably in 1992, but a .219 average is still really bad, and Gedman was released. After playing a brief time with the Yankees AAA club the following season, he retired.

Gedman has stayed active in the Worcester baseball scene, managing the local independent league team for six seasons. Staying close to home, he was named the hitting coach for the Red Sox short-season team in Lowell in 2011, but moved away to Virginia to fill the same role for the Salem Red Sox in 2012. 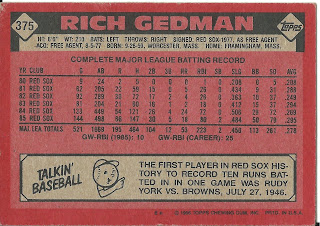 Rear guard: Rudy York was quite a player in the late 30s/early 40s, mostly for the Tigers. He had just been traded to the Red Sox for Eddie Lake, when he had his big day. York hit two home runs (one of which must have been a grand slam) and a double to drive in those 10 runs. For the season, York drove in 119 for a team that scored 792 runs in 154 games.
Posted by Jets Break Jaws at 9:55 PM