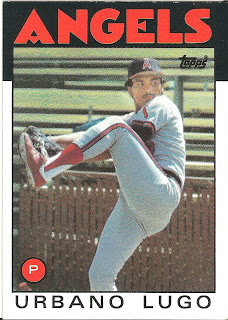 Card thoughts: This is Urbano Lugo’s rookie card, and as indicative of the poor rookie crop that Topps featured in this set, Lugo would only get one other card. His father, identically named, had a card issued for him by Topps when he pitched in the Venezuelan League.

After a decent, but not spectacular minor league career (13 wins in both ’83 and ’84), Lugo began the 1985 campaign in the minors, but was recalled for use in the bullpen. At first only used when the Angels were losing, Lugo was propelled into the rotation on June 11, where he lasted just 4 innings giving up 3 runs. But the Angels won his next 6 starts, with him factoring in three of the decisions. But Lugo could not sustain his success, and after being unable to make it past five innings in his next three starts (he lost all three, giving up 13 runs in 12 innings), he was sent back to the bullpen where he appeared extremely sporadically for the rest of the season.

In 1986, he spent most of the season with AAA Edmonton, going 8-6, only resurfacing for a couple of spot starts and relief appearances after rosters were expanded in September (despite which, he got a Topps card). In the winter, he pitched a no-hitter in the Venezuelan League.

Lugo broke camp with the Angels the following year, but he was abysmal as a starter, giving up at least a run an inning (including 8 in 5 innings on May 1), before being sent to the minors for good later that month.

No longer in the Angels long term plans, Lugo was released and signed by the Expos in 1989 (where he barely pitched), and a year later by the Tigers, where he appeared in 13 games in April and May, with terrible results again, especially in relief (for instance, he gave up 6 hits (including 3 home runs) and 5 runs to the Blue Jays on May 6, turning a close game into a rout.

Lugo, a pretty big wheel in his native Venezuela, runs free baseball clinics in his home country. Unlike on his baseball cards, his photo is all smiles. 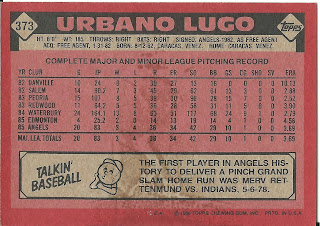 Rear guard: Merv Rettenmund was one of the better pinch hitters in the 70s. His grand slam in '78 was his only one that year. Here's his card from that season.
Posted by Jets Break Jaws at 10:01 PM