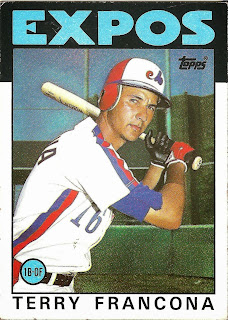 Card thoughts: This post is timely, as Francona just won the Manager of the Year award again. As a player, he won no awards, nor was named to any all star squads. And, strange to say, I don’t recall Francona playing for the Expos, even though it was the team he played the most games for.

As for the photo, the angle makes him look like he's swinging one of those souvenir wooden bats they give out at the game. And Francona really doesn't look like he's aged that much since then.

The player: Son of Tito Francona, as a player he never achieved his father’s success. But his managerial career has made everyone forget about Tito (although it is also Terry’s nickname).

A college hero, Francona was the College World Series MVP in 1980, and was also named Sporting News player of the year that season. This led to a first round selection in the draft that year. Francona rocketed to the majors after just 2 minor league seasons, after hitting .351 between two levels in 1981. He consistently hit well in limited play (.321 in 46 games in 1982, .346  in 58 games in 1984), but found it hard to gain much playing time at his primary position, first base, as the Expos preferred to go with veterans at that position (#1 Pete Rose, Al Oliver, and #65 Dan Driessen all blocked him at one time or another). Francona also missed time with injury, significantly in 1982, he injured his knee, a problem that his plagued him into his middle age. By the time all those guys were gone, the Expos had a better first baseman, Andres Galarraga, waiting in the minors, so Francona was released after the season shown on this card. He signed with the Cubs, and I vaguely remember him with the Cubs, although he was once again blocked at first by a veteran in front of him (Leon Durham) and a hot prospect behind him (Mark Grace).

His stay with the Cubs lasted just one year, and the rest of his days in the majors would also be one year assignments as a pinch hitter/reserve first-baseman/outfielder. In this role, his best season would be with the Indians (1988), where he hit .311, including .333 as a pinch hitter.

Francona is considered one of the best managers in the game today, and is particularly lionized in Boston, where he won two World Series for a team who hadn’t won since 1918.  Of course, when he managed the Phillies for four years (1997-2000), he never got the team above .500, whereas with the Red Sox (from 2004-2011)  he never won less than 85 games. And, of course, he left the Red Sox under controversial circumstances, including the team collapsing down the stretch in 2011, supposedly because of Francona’s distraction due to his pending divorce.

Francona earned a modicum of payback, after his successor, #261 Bobby Valentine, completely tanked the Red Sox in 2012. He took over the Indians, a moribund team the year before, and led them to a wild card berth this past season, earning the Manager of the Year award in the process. 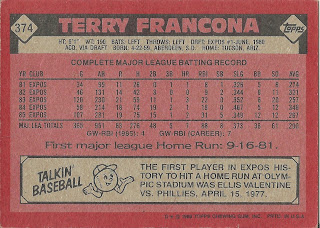 Rear guard: Francona was never much of a home run hitter, so his first one is special. It came off champion closer Bruce Sutter, and began a comeback in which the Expos would eventually win in extra innings.

Ellis Valentine was one of the stars of the Expos in the 70s. 1977 was one of the first of three years where Valentine hit over 20 home runs and drove in over 75 runs for the team. Note that the Expos played their first several years at Jarry Park. Here's Valentine's card from that season.
Posted by Jets Break Jaws at 11:38 AM