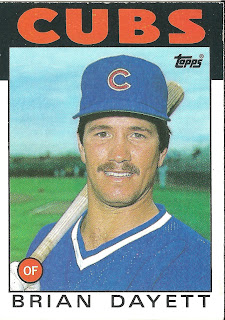 Card thoughts: There are very few cards in this set with such a park-like background (they were really common in the 70s). I do remember this card. However, like Henry Cotto and Gary Woods, I do not remember Dayett as a Cub.

The player: Dayett came up with the Yankees and really impressed them in 1983 when he hit 35 home runs and drove in 108 at AAA Columbus. The Yanks gave him a chance to be a reserve outfielder in 1984, and he got into 64 games, but only had a .697 OPS.

The Yankees traded Dayett to the Cubs in December of that year for the aforementioned Henry Cotto, #94 Rich Bordi, and #157 Ron Hassey. The 1985 season was a wash for him as he was injured much of the year with bone spurs in his ankle. He didn't do much in the 26 at bats he managed.

Dayett spent most of 1986 at AAA Iowa where he hit 19 home runs and drove in 87 runs (and also led the league in sacrifice hits). The Cubs essentially handed him the starting rightfielder job in 1987, but the signing of Andre Dawson nixed that idea. Dayett did not let that get him down, however, as he had his best major league season as a reserve outfielder. He hit 5 home runs and drove in another 25, and managed a .452 slugging percentage.

It was obvious that Dayett was a 4-A player, and those guys are generally wanted for Japanese teams. His contract bought out by the Nippon Ham Fighers for a cool quarter mil, Dayett spent four years over there. He had a hard time staying healthy, and he didn't provide much sock, with a high of just 15 home runs.

After retiring, Dayett opened a sporting goods store, and later managed a couple of seasons in the minors. He's now the hitting coach for the Spokane Indians. 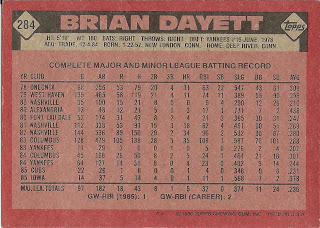 I literally have this card in front of me right now.