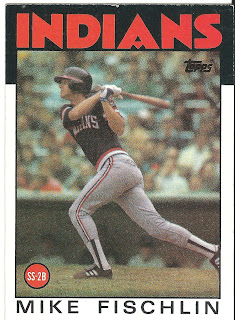 Card thoughts: This picture of Fischlin makes him look like an angled lower-case h.

The player: A high-school teammate of superagent Scott Boras (more on that later), Fischlin was selected in the 7th round of the 1975 draft by the Yankees. Until he was in his 20s, he was a terrible hitter, once hitting .153 as the starting shortstop at AA West Haven. As soon as his hitting reached a respectable level, he was sent to the Astros in a minor league deal.

Fischlin reached the majors with the Astros, but he was a miserable hitter. For instance, in 1978 he had 86 at bats and hit .116. This wasn’t going to cut it in the majors, and the Astros sent him quickly to the Indians for Jim Lentine. Curiously, the Indians gave him the starting shortstop job in 1982, and Fischlin had a pretty decent season, and the only one where his WAR was above 1. He hit .268 and had career highs in just about every offensive category.

But Julio Franco arrived the following season to play short, and Fishlin played the majority of his games at second, platooning with Manny Trillo. That season, he reverted to form, hitting only .209 despite getting into 95 games.

The next two seasons, Fischlin would see his playing time continually decline, as his hitting was just too much of a liability to have his bat in the lineup very much. By the time this card was issued (in a season where Fischlin had the unusual distinction of having less plate appearances (69) than games played (73)). He was relegated to mostly being the pinch hitter that was put in when the game was already lost, or as a pinch runner.

The Indians cut ties with Fischlin after the season and he was picked up by the Yankees, his original organization, for Kevin Trudeau, a guy who didn’t even last a year in the Indians minor league system. The Yankees must have liked Fischlin’s versatility, because he didn’t bring much else to the table.  Playing short and second, his average once again was barely above the Mendoza line (.200). He played in one last game with the Braves (as a pinch runner for #95 Ozzie Virgil) before he was done. His career average was .220 and he actually had a negative career WAR, which means Fischlin is a very lucky man to have played any major league ball, much less a decade.

Fischlin was the first client of Scott Boras (and perhaps his long survival as a sub-par player is an early indication of Boras’ negotiating skills). This connection was important, as he joined Scott Boras’ agency after retirement and is now the vice president of player development. 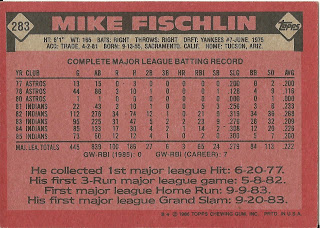 Rear guard: The highlights on the back show that even a poor major league hitter has moments of brilliance. Considering Fischlin only hit 3 home runs in his career, that grand slam must have been a shock to Brewer pitcher Mike Caldwell. The blast drove in Bake McBride, #157 Ron Hassey, and Carmelo Castillo.
Posted by Jets Break Jaws at 2:53 PM