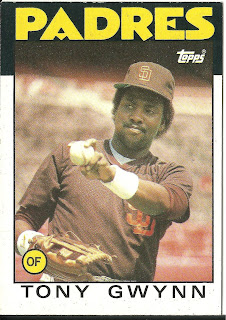 Card fact:  Tony Gwynn earns the coveted Topps card ending in 0 on the strength of his .351 average the year before

Card thoughts: For one of the greatest pure hitters in my lifetime, kind of odd to see Gwynn in a pitcher's pose, getting ready to throw a forkball. And dig the jeri-curl!

The player: Gwynn was just getting started on what turned out to be a hall-of-fame career. As a hitter, he's very similar to Pete Rose: Lots of singles, high average, not much power, and rarely walked or struck out. He led the league in average 8 times (including an incredible .394 in the strike shortened 1994 campaign), in hits 7 times, and he won several gold gloves as well. A lead off hitter in his early career, in the late 90s he was asked to hit in the middle of the line up and drove in 119 runs (with only 17 hrs!) in 1997, his last great season. He never hit under .300 as a regular player in his career.

Gwynn is currently the baseball coach for San Diego State University (his alma mater). His brother Chris played outfield for the Dodgers and Royals, and his namesake son plays outfield with the Dodgers. 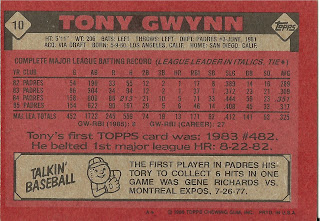 Rear guard: I'm sure lots of people though the .351 average in 1984 was an aberration. It wasn't. Gene Richards was an early star of the Padres, who didn't have a very long career. Those 6 hits came during his rookie year.

The tally: It's all even. One each of posed, action, head shot, and candid.
Posted by Jets Break Jaws at 8:08 PM