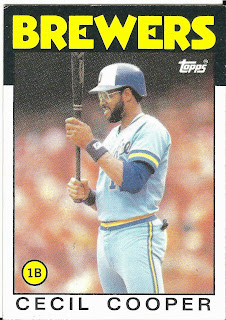 Card thoughts: Cooper sported a variety of facial hair on his cards. In the 70s, he was fond of the mutasche/long side burns combo. By the time he came to the Brewers, he took to wearing shaded specs and the neatly groomed full beard you see on this card.

The player: Like his teammate (on both the Red Sox and Brewers) #373 Ben Ogilve, Cooper was blocked for years by a veteran at his position (in his case, legend Carl Yastrzemerski). But with a batting stance change (an exaggerated crouch), and a change in scenery, Cooper became a star in the 80s for the Brewers.

Raised in a large family full of pro baseball players (both his father and older brothers played in the Negro Leagues). Drafted out of high school by the Red Sox, he hit .336 with their Midwest League affiliate (Danville) in 1970, prompting the Cardinals to draft him, but he was returned at the end of spring training the next year.

Cooper spent a couple of years as the Red Sox’s primary designated hitter, which was a shame because Yastrzemski was playing first because he was old, not because he was a good fielder. It was hard to keep Cooper out of the lineup because he had a good bat, but he got hit in the face in 1975, and that sidelined him for a while.

Finally finding Cooper’s bat superfluous to their team, the Red Sox sent him to the Brewers in 1976 for Bernie Carbo (great pinch hitter, troubled person) and George Scott (a bit over the hill, but had one great season left in him). Out of the shadow of Fenway, Cooper began to shine. He hit over .300 in each of his first three Brewer seasons, with an especially good 1979 season, when he made the all star team, won a gold glove, and led the league in doubles (44).

In 1980, Cooper would hit .352 and led the league in RBIs (122). Most years, that batting average would have topped the league, but George Brett hit .390 that year. Cooper would continue to be consistently productive until 1984, generally ranking in the top 5 in MVP voting, hitting over 30 home runs, and driving in over 100. In doing so, he was a favorite in Milwaukee, even penning a kids’ column in the in-house Brewers organ What’s Brewing. He also gave back to the community, winning the Roberto Clemente award for public service in 1983.

Since retirement, he’s worked as a sports agent, farm director, scout, and manager (most recently for the Houston Astros). Cooper is still one of the greatest Brewers off all time, and although not of Hall of Fame caliber, he comes close. 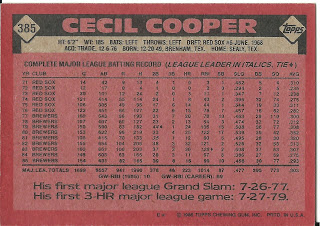 Rear guard:  I wonder if Topps picked these dates because they were almost exactly two years apart? Well, I don't know what day his first grand slam was, because on July 26th, Cooper went 0-4 with 2 strikeouts.
Posted by Jets Break Jaws at 10:44 PM