Card thoughts: Not as fat as he’d get when he was with the Tigers, Fielder’s still showing a lot of girth as he takes his hacks (presumably) right after #168 Jeff Burroughs. This is his rookie card.

The player: Cecil Fielder seemingly came out of nowhere to hit over 50 home runs (actually, Japan) in 1990. Much like his son, Prince, Fielder was always suspect because of his weight, which limited his mobility in both the field and at the plate. But he proved the doubters wrong, as he consistently slugged for about a decade after that initial power explosion.

Fielder had a lot of pop in the minors for the Blue Jays and Royals (20 HR, .645 slugging for Butte in ’82; 28 HR between A and AA in ’84), he was blocked in the majors by veteran Willie Upshaw. When Upshaw finally moved on, another top prospect, Fred McGriff, had supplanted Fielder as he had a similar power profile, but was a much better fielder.

Fielder would get his chance when he was signed by the Tigers—the Hanshin Tigers of the Japanese League. At this point, Fielder was considered a 4A player, and he relished the opportunity to earn some money (a reported salary of over $1M), and some respect (the team assigned him a chauffeur and a full-time interpreter). By this time, Fielder weighed in at over 280 pounds and he was nicknamed “Wild Bear” for his hulking stature. He ended up belting 38 home runs and slugging .628 for the team.

This got the (American) Detroit Tigers attention, and they signed Fielder. Obviously no expecting much, he was only signed to a short-term contract. But he surprised everyone by leading the league in home runs (51) and RBIs (132), while finishing second in MVP voting. Fielder was the first player in 25 years to reach the 50 home run mark, and the first on the Tigers since Hank Greenberg did it in 1938. The next year, Fielder again led in home runs (44) and RBIs (133), and followed that up in 1992 with yet another RBI crown (124).  Not only was Fielder hitting a boatload of home runs, but home runs were often prodigious. He once hit a home run completely out of Milwaukee County Stadium (the only player ever to do that), and also became only the fourth player in history to clear the left field roof in Tiger Stadium.

Although there were constant concerns about Fielder’s durability, even with all that weight he rarely got injured. He was a fairly one dimensional player, however with one plus tool (power). As he aged, Fielder’s shortcomings in the field and on the bases (he was one of the slowest runners in the league), led the Tigers to explore a trade in 1996, despite the fact they had made him one of the highest paid players just a year before. They found a willing partner in the Yankees, no stranger to high-priced sluggers, and they received Ruben Sierra, another aging slugger, in return.

With the Yankees, Fielder was confined to designated hitter, and although still productive, he had a hard time staying healthy in his only full season there (1997). Fielder’s career would end as a bench player for the Angels and Indians the following season.

Although Fielder and his son, Prince, were once close, the two had a falling out after his father tried to claim part of his salary because he had helped him negotiate his first pro contract. These shady dealings may be tied to Fielder’s reported gambling problem, which left him bankrupt and eventually destroyed his marriage. (Fielder denied these allegations, and sued USA Today for reporting on them. However, the libel suit was dismissed.) Father and son have apparently reconciled, and Fielder has gotten back in the game as a coach for a few indy league teams, and organizing a kiddie World Series. 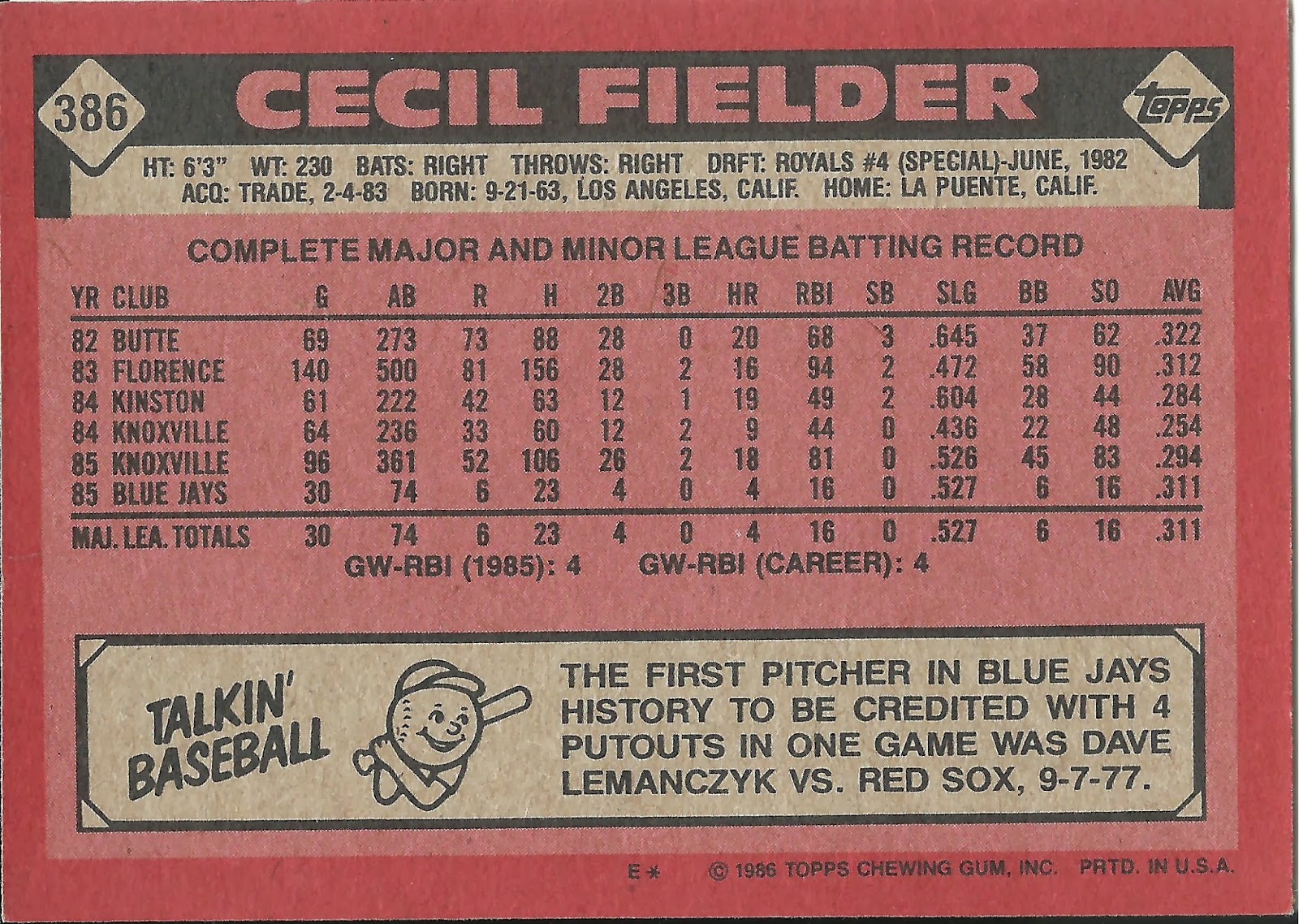 Rear guard: 230 pounds? I think not! Anyway, I can't even begin to pronounce Dave Lemanczyk's name, but I would say recording 4 putouts in a game is not especially exciting for a pitcher. Although he was second in the league in putouts that year, perhaps because he pitched 252 1/3 innings. Here's his 1978 card.

I was living in SE Michigan during his first year on the Tigers. We went to a game very early in the season and I brought along one of his old Blue Jay "common cards" for him to sign. I offered one to my brother but he declined. At the time he had already hit four or five homers, but his avg was still terrible. Sure enough, he came to the rail and signed my card. I distinctly remember thinking, as he signed it, "why did they pay you a million bucks to come back to the states?" During that game, while my brother and dad were at the concession stand, Fielder hit yet another homer, and by the end of the season, that signed card was one of my most prized possessions.

I remember the Toronto Star, the local paper, ran an article, in 86, about a for-charity hotdog eating contest. It was to be between the Jays and the Argos, the local football team. In that article, its was written that Jimy Williams wouldn't let Cecil compete, because he had to stay under a certain arbitrary weight in order to play. He looks quite svelte in that card pic, certainly more so that during his Tigers and Yankees day.