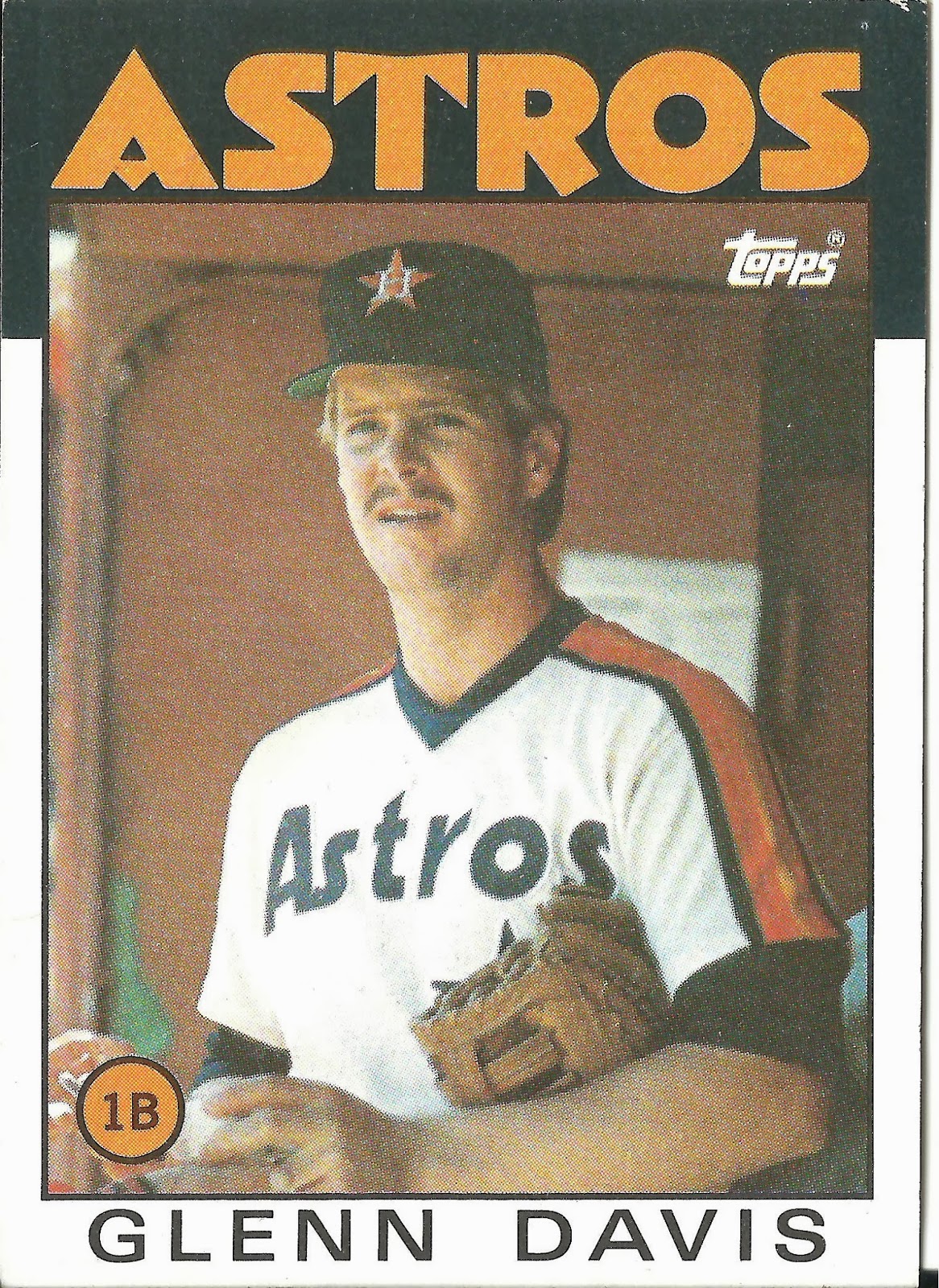 Card thoughts: This is Glenn Davis’ first Topps card, but I also owned his rookie card, on which he was incongruously paired with Joe Hesketh. For years, this card occupied a prized place in my collection.

The player: What happened to Glenn Davis? Part of a large crop of up and coming slugging first baseman in the mid-80s, his time as a star player was brief.

Davis grew up in a troubled household. His father, a failed minor league infielder, would take out his frustrations on his son. His mother, a bible thumping type, routinely beat him. Suicidal and violent in high school, Davis still starred on the field. When he reached college, the athletic director “adopted” him (the director’s son—Storm Davis—also became a major league player.)

Fighting his personal demons all through the minors, Davis stopped womanizing and drinking when he became a born again Christian. After driving in 94 runs at Tuscon in 1984, Davis got a brief taste of the majors at the end the year, hitting .213 in 18 games. Perhaps suspecting his maturity, Davis again started the year at AAA in 1985, with veterans #197 Enos Cabell and Denny Walling splitting time at first. But with the trade of Cabell midseason, a spot opened up for Davis and he grabbed the opportunity, hitting 20 home runs in just 350 at bats, coming in fifth in Rookie of the Year voting.

Davis really burst out in 1986, however. With a profile on him in People magazine and the Astros on their way to a division title, he scored 91 runs, hit 31 home runs, and drove in 101. He was a bright spot in the NLCS as well, hitting .265 overall, and going 3 for 7 in the 16 inning marathon that was Game 6. At the end of the season, Davis finished second to #200 Mike Schmidt in MVP voting.

Davis consistently put up good power numbers over the next three seasons, generally hitting above 25 home runs, and driving in at least 85 runs. However, as a precursor to the rest of his 1990 season, Davis was it 3 times by Reds pitchers on Opening Day. He later missed much of the second half of the season with a rib injury. Despite appearing in only 93 games, he led the league in being hit by pitch (8).

In what was seen as a good trade at the time (given his track record), Davis was traded to the Orioles in the offseason for three future all stars (Steve Finley, Curt Schilling, and Pete Harnisch), although Finley and Schilling became stars after they moved on from the Astros. The trade is now considered one of the worst in Oprioles history, especially as Davis suffered a pinched nerve in spring training in 1991, limiting him to just 49 games that season (and an abysmal .227 average).

Even in his bounce back year (1992) Davis was a shell of his former self, as he could only muster 13 home runs and 48 RBIs. But 1993 was a disastrous season, which effectively ended Davis’ major league career. Hitting just .177, and apparently going back to his former bad ways, his jaw was broken in a bar fight. After getting back from the DL (and subsequently sent down to AAA), he was sitting on the bench after being called back up, when he was hit in the head by a line drive during a game. Finally cleared to play in September, he got in a shouting match with manager Johnny Oates about his lack of playing time, leading to his release.

Now with a reputation as an oft-injured malcontent, Davis could only land a job at AAA with the Royals. But despite hitting well there, he wasn't called up, and eventually ended his career in organized ball with the Hanshin Tigers in Japan.

In retirement, he’s become a bit of a big wheel in Columbus, Georgia, where he started a home for disadvantaged children, holds a seat on the city council, and owns a hotel in town. 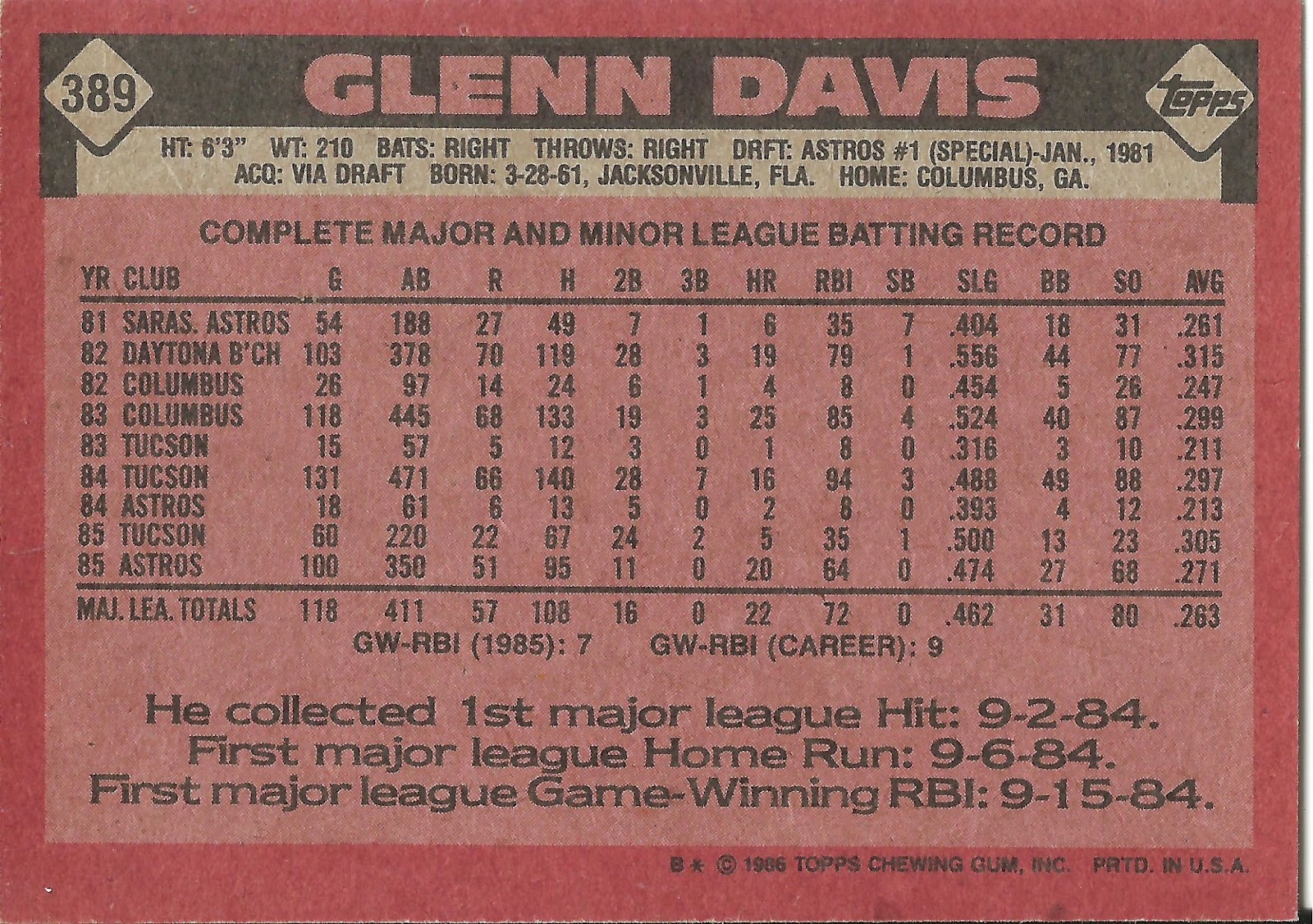 Rear guard: Davis' first hit was in his debut. He doubled off cardinals pitcher Ricky Horton.
Posted by Jets Break Jaws at 10:06 PM